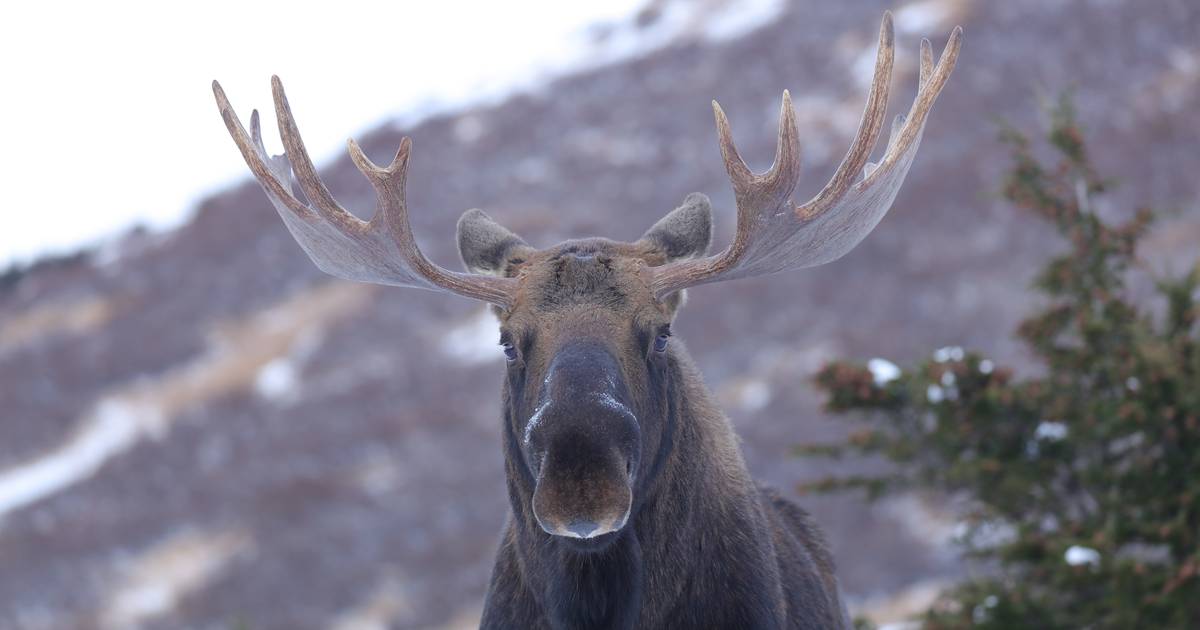 A moose, a camera and a cautionary tale

“Well,” I smiled to myself as blood dripped from my face onto the front of my shirt, the bloodstained camera hanging from the neck strap appearing to be in good condition, “it’s going to be a great story. “

As I sat on a steep mountain slope, the evening air became crisp and cold enough to cake over the snow that barely covered the ground, and my view looked out over the mountain valley. Shortly after, a bull moose emerged from a cluster of junipers, glowing with their pastel blue berries braced by the change of season.

The bull, a medium-sized animal, did not appear to show any signs of damage from the fights he almost surely lost to several larger bulls that occupied the valley. He walked quietly, tearing off bites of willow and birch for supper.

After watching for a few minutes, it looked like the bull wouldn’t move far and would probably lie down somewhere nearby. Another clump of junipers about 75 yards from the bull beckoned as cover from which to photograph the great ungulate.

I lost sight of the moose when I descended the slope to cross a small fast-flowing stream and came back up the opposite slope. When I got to the subalpine clearings, I could see the bull several hundred yards away, still feeding and not moving much. I approached aimlessly, making sure the heavy giant knew I was there and gauging his mood.

All looked good when my approach brought me to the clump of junipers. I dove in and came out the other side. About 50 yards away, the bull lifted its head, glanced in my direction, then returned to feed.

I started taking pictures – maybe taking pictures is the wrong word for digital – and with the camera shutter set to silent mode, the moose didn’t lend any Warning. After a while, the huge antlered animal framing the backdrop of the snow-capped mountains began to sail towards where I was standing, one step away from a gap between two large trees where I could seek shelter if the things were turning south.

When the bull came within 20 yards, I started talking, as I often do with animals, and raised my voice a bit. Still, he continued on. At 10 meters I entered the trees and stopped.

As he stood there, contemplating how long it would take before the animal, now filling my nostrils with post-rut stench, moved away, he approached.

I think of this event whenever there is a news story about an unfortunate tourist being seriously injured or killed while approaching big game in national parks, most recently and most notably, Yellowstone.

I passed through Yellowstone once in the 80s. Not being there as a park visitor, I wanted to get through as quickly as possible and continue on my way. But, a big bull bison standing in a meadow made me stop.

At that time, I had a good single-lens reflex but no telephoto lens. I wanted close-up photos of this big bull in the worst possible way. Luckily for me, although I’m missing a big target, I brought in what the people you often read about apparently don’t have – my hard-earned experience with big animals. I understood what game speed meant.

While appearing to the world, as most large ungulates do, as harmless and slow-moving as Farmer John’s cash cow, my experience with large animals has told me that attempting to approach this bison without a form of cover to escape if things went wrong, would be almost suicidal.

It’s easy to categorize people who suffer injury or death as stupid for putting themselves in these situations. I’ve said it enough times myself. But that’s not really fair. The fact that they are in a place like Yellowstone or Denali suggests a certain appreciation for wild places and the animals that live there.

I imagine the limited life experience with animals these people might bring from an urban environment and the claims that wild animals are friendly, cuddly and would love nothing more than you scratching your ears.

Maybe it’s a bit like peeing on an electric fence. Maybe you’ve heard the stories or seen the news, but you just can’t believe that a jerk to the genitals is so bad or that someone trampled to death didn’t do anything to cause it. , something which, of course, you will not do. So you try. I can tell you that the electric fence experience is a game changer and any wild animal, given the right circumstances, will attack you. Catch a squirrel once in a while if you doubt it.

Without experience, it is almost impossible to imagine how fast wild animals are. I’m talking about game speed. It’s when a combination of adrenaline and physical makeup explodes in lightning-fast bursts of movement.

The moose came even closer and turned its flank, maybe 10 feet in front of me. I wasn’t too worried as I had the trees for cover, but still, the adrenaline kicked in when the bull looked straight at me, the white of his eye shining.

When an animal stares at you with that “spooky-eyed” look, you can bet you did something to enrage that animal, and you better be prepared for it.

I took a picture of the bullseye then settled into the brush, thinking it would calm down. After about 10 minutes the bull seemed to forget about me and moved around the clump of trees I was standing in, returning to feed along the edge.

He had gone around my grove and reappeared quite close, in front of me. His eyes had calmed down, and everything seemed to be fine. However, in my trance as a photographer, I wanted a wide-angle shot of him with the mountains in the background.

While collecting the camera with a wide angle lens in my bag, I forgot to turn off the shutter. I made my way between the two trees to get a clear view while still having a quick escape route.

The instant the shutter clicked, the bull charged the sound. I half fell, half backed into the trees when he hooked the camera with his antlers and slammed it against my nose and cheek.

I screamed when I was hit, and the moose ran past me, turned around, and crushed some small willow bushes. I was safe in the trees, but my camera bag, with the camera and telephoto lens, was out of the trees. I did not dare to get it.

It was a long cold wait for the moose to move far enough away for me to leave. He had migrated to the back of my clump of trees, and I rushed towards him. I ran for a bit before turning to look back, and there he was, standing on the slope, giving me a look that said, “Don’t come back. I did not do it.