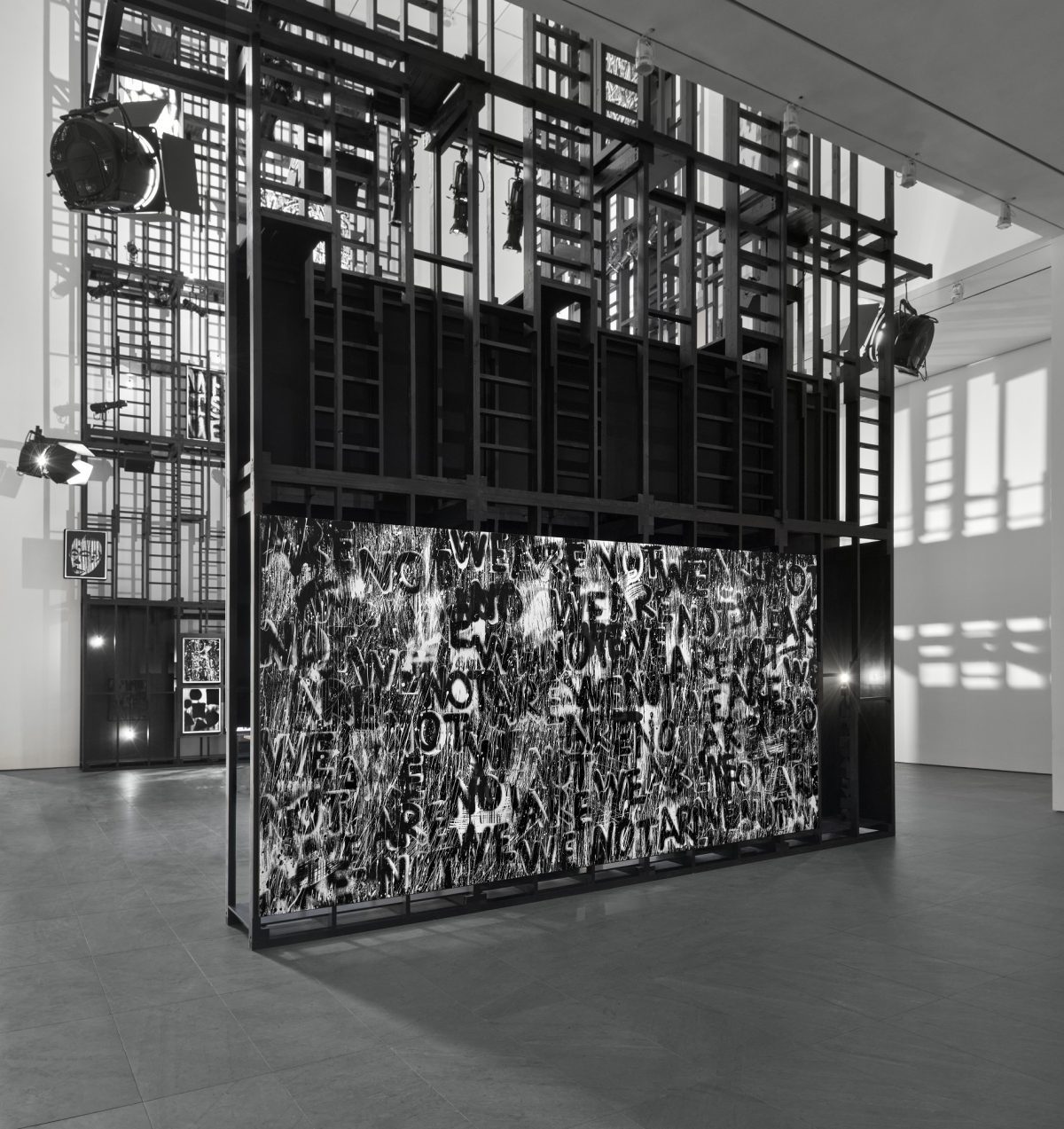 that of Adam Pendleton Who is queen? bristles with colossal agitation. Covering the central atrium of the Museum of Modern Art (MoMA), the installation’s imposing presence is enhanced by a five-story black scaffolding, a skeleton-shaped container that contains a DIY of two-dimensional works on screen printing as well as sculptural works in wood. The centerpiece of the installation is a dialogue between two films: “Notes on the Robert E. Lee Monument Richmond, VA (figure)” (2021) and “City of the Resurrection Film Notes” (2021). A third film, “So We Moved: A Portrait of Jack Halberstam” (2021), intervenes intermittently in the story, screened daily at 12:30 p.m. and 4:30 p.m. Projected in dazzling, theatrical white light, Pendleton’s installation transforms the atrium into a stage for the tumultuous unfolding of a total work of art; a stormy assemblage of films, sculptures and sounds that plunges visitors into the unstable throes of protest and struggle.

The thesis of the installation revolves around a collision between two sites of protest and resistance. “Notes on the Robert E. Lee monument in Richmond, Virginia (figure)” (2021) studies one of today’s most recognizable icons of Confederate violence, which 2020 Black Lives Matter protests turned into a visual archive of dissent. Meanwhile, “Resurrection City Film Notes” (2021) turns to another site of contestation, the holder City of the resurrection, a popular tent town and anti-poverty protest erected at DC’s National Mall in 1968 after the assassination of Martin Luther King.

But on the MoMA screen, these two moments of history slip together into a picture of the long duration of the struggle. In fact, after entering the exhibit relatively unconsciously, it wasn’t until I looked closely at the museum’s wall text that I realized I had watched two separate films. But rather than seeing this lack of firm distinction between the two films as a curatorial or artistic failure, I approached it as a generative osmosis. As they slide and slide together, the films reveal an honest picture of the story and the struggle that is muddled and impure rather than crisp or easy to follow. The camera seamlessly shifts from archival footage of the Resurrection City to contemporary footage of the Robert E. Lee monument. The gaps between space and time that are supposed to separate the two films are filled by their visual congruence: both films are shot in black and white, suggesting nostalgia for a time gone by. Although grayscale is endemic to images from “Film Notes on Resurrection City, ” the lack of color in “Film Notes on the Robert E. Lee Monument” diminishes its contemporaneity, inaugurating a blur between the two historical moments that Pendleton takes as a starting point.

In fact, monochrome – a staple of Pendleton’s work – structure the entire installation. In the textual serigraphs that decorate the scaffolding, the monochrome obscures and makes sense at the same time. In a writing disaster, dense layers of black and white graffiti-like lettering clutter the panels, stacked successively on top of each other. We are left with the textual equivalent of screaming: words and sentences are cut into letters that compete in visibility, layers and layers of text seem to cry out at us, denying the ease of readability that our eye craves. Buried in that thick buzz of calligraphy, I remembered the graffiti that came over the base of the Robert E. Lee monument that Pendleton recalls in his film – that restless display of words that has become one of the rebellion’s many signifiers. against white supremacist command logic.

Called from Richmond to Washington to the galleries of MoMA, swinging between those distinct but indistinct moments in history, I also found myself wheeling through multiple experiences of time, a speeding up and a slowing down that left me in. a whirlwind of movement and stillness. Through the editing of active video sequences and still photographs – most often portraits of people in the camp – the story becomes both massive and immediate. Time passes before our eyes as images of civil rights marches pass between images of Freedom Riders. Next, the film delves into the graceful speed of intimacy as the camera relies on neat portraits of Resurrection City residents and protesters. Sometimes the camera dares to interfere in the stone face of Robert E. Lee, lingering for several close-ups. This intimacy seemed almost disturbing: made vulnerable by this fixed and perceptive gaze, the monument seemed for a moment almost stripped of its power.

The rambling temporality affected by these visual arrangements explodes in Pendleton’s accompanying sound collage, a contrapuntal cacophony of wrestling that engulfs the audience in layers of music, lyrics, song, and speech. A contemporary musical arrangement by Hahn Rowe entitled “Yellow smileâ€(1994) spans both films, taking with it the tense lyricism of violins and electronic sound. In “Film Notes on Robert E. Lee,“ Rowe’s piece is superimposed on a clash of two decidedly distinct sounds: a 1980 recording of the poet and the revolutionary Amiri Baraka and a 2014 iPhone recording of a Black Lives Matter Demonstration in Manhattan, which brought me back to my own memories of various protests. Baraka’s controversial cadence intersects and is cut off by a crowd tide, and poetry erupts in the sound of mass protest. We are immersed in a sound tidal wave of today and yesterday like history crescendos et decrescendos. In the frenzy of Pendleton’s rhythm, history doesn’t just repeat itself. On the contrary, he leaps forward, stammers, stops to catch his breath, sneaks up on himself. It is a time that refuses regulation or order. As I initially struggled to follow, I eventually surrendered to disorder, allowing the facility to overwhelm me in all its chaos.

At 4:30 pm on the day of my first visit to the Pendleton facility, time again slowed down and gave way to “So We Moved: A Portrait of Jack Halberstam,Which follows the radical life and work of Columbia University Gender studies teacher. The film was placed between the two Cinema Notes, preceded by its own introductory text: a poem by TS Eliot from which the title is derived. The presence of Eliot at the opening of the film is enlightening: Halberstam is substantially engaged with the poet. In his book 2020 Wild things, Halberstam theorizes Eliot’s theory Four quartets as generating a “sense of a disorderly orientation to time and life”. This sensitivity comes to the fore in Pendleton’s film, who reveled in the slowness required to paint a portrait. At the same time, the film left me impatient, yearning for a new worldview that Halberstam demands is possible. â€œI believe in collapsing order,â€ remarks Halberstam. “Instead of refusing the label of monstrosityâ€¦ embrace it.” The visual and sound tumult of Pendleton’s installation responds to this invitation. He insists on a monstrous politics and aesthetic of disorientation, the contortion of time, space, image and sound to offer what is perhaps a prelude to the destruction of order itself on which rests our world. Scaffolding climbs the interior walls of MoMA, devouring the museum and consuming the audience in a tumult of activity with it.

The anarchic aesthetic of Pendelton’s work offers us a lot to savor. At the same time, I wondered if the installation had fully succeeded in its ambitions of being a â€œtotal work of artâ€. Although the premise of the exhibition favors the multitude in the singular, the chorus over the soloist, the installation seemed to me to prioritize the film over other relevant media. To some extent, the film has the unfair advantage of having more pictures, sounds and movement. But this distinction between the media is only accentuated in Who is queen?; while the film is brimming with sound and visual stimuli, the scaffolding seemed comparatively underutilized. As rich as Pendelton’s textual panels were, the scaffolding itself seemed full of negative space, a lack that became particularly evident given the vastness of the scaffolding and its contrast to the white walls of the gallery. The media problem was highlighted by what looked like a lack of integration between the film – which looms on one wall – and the rest of the installation. The chairs face the screen, encouraging viewers to sit and watch movies in a stationary position. But the installation requires an activity on the part of the spectator: to experience it fully has required me to navigate the room and pass through multiple perspectives of observation, to approach myself to lose myself in the details then to step back, craning your neck to see the highest registers of the scaffold. Sitting down to watch the films and then standing to face the rest of the installation, this tension between the active and participatory experience of the total installation and the more passive viewer of the film seemed unresolved.

Space itself comes with its own unresolved questions. It’s important to note that Pendleton’s exhibit is textured by a third protest site: MoMA itself. For months, coalitions of activists in New York have recently staged continued protests against the museum for its support for toxic philanthropy and the ties of many of its board members to the prison industrial complex and the Israeli occupation of Palestine. Pendleton’s project assumes a particularly strained relationship with these institutional policies. Not only did the project occupy a building – or perhaps more accurately, a monument – embroiled in the protest, but Pendelton also carried out extensive archival research in museums at MoMA and the Walker Art Center in Minneapolis to make the project possible. At the same time, the premise of the project is rooted in institutional criticism – its radical proposition depends on a contrast between the limits of the museum and the madly uncontrollable form of the installation. Faced with growing calls for a world beyond museums and monuments, Who is queen? is caught in the crosshairs. Yes, the project is destabilizing on its own terms, but also mired in the tensions of what it devours.

Adam Pendleton: Who is the queen? continues at the Museum of Modern Art (11 W 53rd Street, New York, NY) until February 21, 2022. It was organized by Stuart Comer, Danielle A. Jackson, Gee Wesley and Veronika Molnar.

Sentimentality would creep into the artist’s late evocations of remembered childhood scenes, just like idealization.

The work in The Travel Section points to the isolation of a lockdown, but it is not without moments of liberation.

Conservative critic Gilbert T. Sewall wants to bring the Met back to life.

God’s Tipster is betting four races, including a long shot in the 2nd

Get your turkey – with a secondary vaccine order – Delco Times