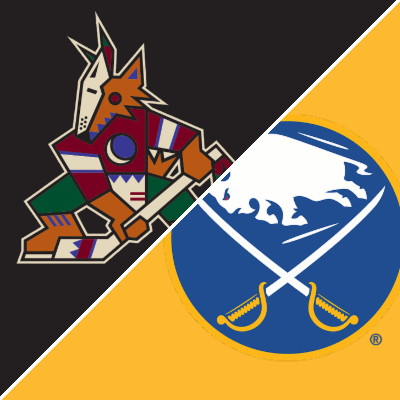 BUFFALO, NY — Karel Vejmelka made 32 saves to lead the Arizona Coyotes to a 4-1 win over the Buffalo Sabers on Tuesday night.

Thompson put Buffalo on the board with a power-play goal with 5:34 left in the first. Inside the left circle, Thompson cut further inside before ripping a shot high into the far corner. It was his eighth goal of the season.

Maccelli was credited with Arizona’s second goal with 3:30 left in the first after his pass ricocheted off the skate of Sabers center Dylan Cozens into the Buffalo net.

Arizona took a 3-1 2:24 lead into the third after another deflection from Cozens. O’Brien’s long point shot was deflected by the Sabers center en route to the net.

Vejmelka’s best save of the night came with 3:22 to go when he stopped Buffalo’s Rasmus Asplund at close range.

Keller added an empty-netter with 2:10 to go.

There was a 20-minute delay before the start of the third period due to Zamboni’s malfunction. The Sabers kept the hometown crowd engaged by playing music and showing fans dancing on the Jumbotron. One of the loudest standing ovations of the entire night came when the Sabers showed Buffalo Bills left tackle Dion Dawkins on the Jumbotron during the delay.

THE RETURN OF DAHLIN

Sabers defenseman Rasmus Dahlin returned after missing one game with an upper body injury. The Sabers are starting to get healthier on the blue line; Ilya Lyubushkin returned on Saturday after missing four games.

It was the second game of a 14-game road trip for the Coyotes. They opened the long trip with a 3-2 victory over Washington on Saturday. Their next home game won’t be until Dec. 9 against Boston.

Coyotes: At the New York Islanders on Thursday.