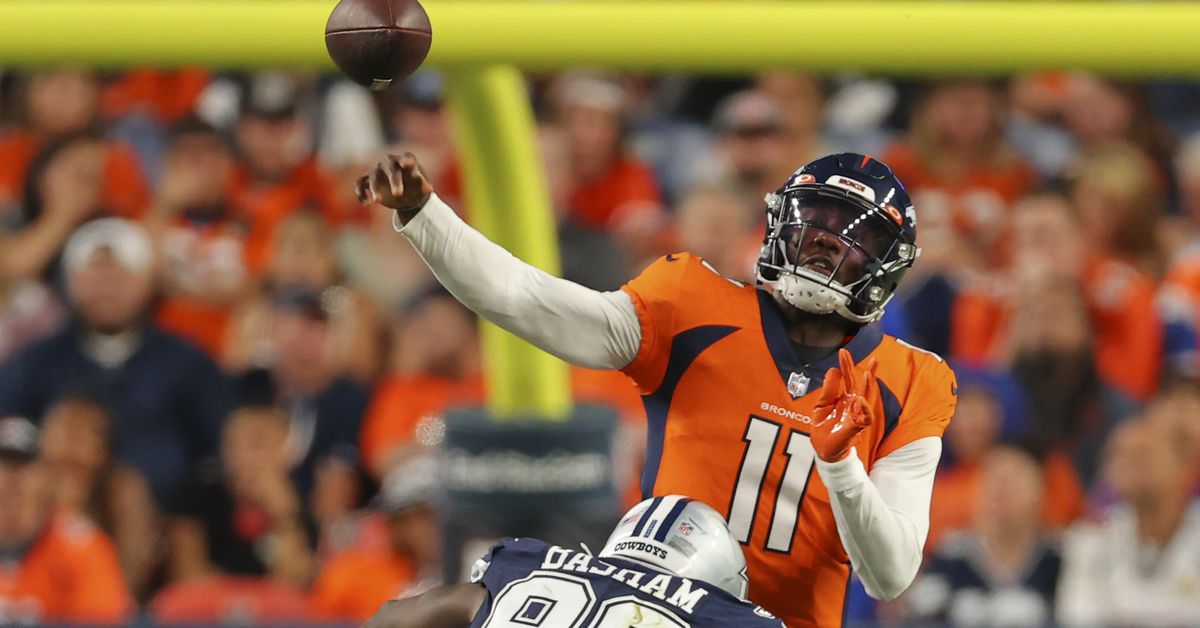 Finally, we get some semblance of a fresh start with our beloved Denver Broncos. A fresh start in Broncos Country marked by a solid win (even though it was basically a junior varsity scrimmage).

It’s a pre-season game where almost all of our starters have sat. It’s complicated by the fact that we don’t know Nathaniel Hacket or Ejiro Evero in their current roles.

What will the offense basically do?

How aggressive is the defensive front?

Are we going to take risks on the 3rd tries?

Getting to know these coaches is going to be a joy and it will take time. We can certainly learn a little more about these kinds of questions in pre-season, but what we get will be very shallow on substance. Most of the calls last night were quite vanilla in nature. Basic Attack vs. Basic Defenses.

That being said, the team represented themselves well and seemed well trained. While the Dallas Cowboys continued their penchant for playing loose with the rules leading well over 100 yards on penalties, the Broncos appeared to be well disciplined in contrast.

During the preseason, I largely only care about which teams will actually be on the roster in the regular season. Given that, the defense was staggering. They helped the Cowboys offense lay a big goose egg in the first half.

You could say it could be more the fault of a statue at the QB that looked bad at most of the things you want an immobile QB to do in the NFL. I will not discuss this point at all.

Still, the Broncos can’t control who lines up against them in any given week and they took care of business.

Baron Browning really stood out for me in this game. He was flying around the field, getting into the Cowboys’ backfield and wreaking havoc in general. He had a TFL, PD, QH and capped off his performance with a big sack in the 2nd quarter. I was one of those scratching their heads this offseason about Browning’s move from the ILB to the OLB and I have to say in this game against substitutes he absolutely looked like he was playing.

Seeing an injury happen to Jonas Griffith from the start was heartbreaking. From all we’ve seen, he went all out for us in training camp and firmly took on one of ILB’s starting roles in the team. His dislocated elbow is going to take 4-6 weeks to recover from, so at least we’ll see him again at the start of the season. This is a superb opportunity for Alex Singleton and Justin Strnad to get some valuable reps with the 1s and make a statement to the trainers about their quality.

McTelvin Agim showed a very nice dominant pass run to flip a pass and stop a drive. It’s good to see a guy who can make an impact as a depth player in the team.

Michael Ojemudia had a night of ups and downs, but the one game he gave up for a good chunk of footage cost us no points. It still looks like a solid backup corner to me. We’re going to need him as the season progresses and honestly he seemed sharp to me.

PJ Locke broke on an early pass to get an INT on 4th down. It was a very solid job of diagnosing the situation and making a play. It was certainly helped by a stifling pass rush in the face of the QB who rushes the game, but as they say, “the ball does not lie “.

This game is all about the execution. There’s not much to chew on when it comes to what the offense was doing. There were plenty of simple reads, vanilla calls, and basic concept and route practices necessary for anything based on the West Coast system we’ve watched develop in the NFL for decades. .

That being said, I liked the leaning towards the passing game in preseason. Lines won’t be great with 2nd and 3rd strings, so you won’t get solid leads anyway (look at the stat sheet).

I liked that both units had deeper plays to show us all they can do.

We’re used to seeing that level of play here in Broncos Country. We’ve been living it for 6 long years… Backup quality NFL QBs, anyone?

Trash speaking aside, I honestly thought we needed to see a definite upgrade to Josh Johnson’s backup. Johnson provided an assist while taking a huge jab to throw a penny on the sideline on the pitch for a big win. He threw a very catchable ball with good touch on his two TD throws. He looked like a guy who knew exactly what he was doing (unlike the last few years where guys always had a bit of a confused face on any game).

Rypien made a silver roll to get out of 1st down on 1 to start their practice. His arm isn’t as hot as Johnson’s, but he’s obviously worked on the timing of some of those routes with his receivers. It’s a big deal that he didn’t end his good run with points, though. You’re up against the 3rd and 4th strings and you’re inside the 10. It’s TD time if you’re going to stick around as an NFL backup.

The one thing I wanted to see the most was our starting offensive line. Unfortunately, we were unable to see this. Saves from both units didn’t do very well when blocking execution while being somewhat consistent when blocking passes.

Max Borghi may be a little cat, but he’s a fierce runner. I know he’s a local favorite, but I’m having a hard time seeing him having any impact against an NFL starting defense. I thought he looked good as a runner, however and if we had a better line in front of him my opinion might change.

Mike Boone struck me as very disappointing (like most of our racing game, honestly). His runs didn’t do much more than what was blocked. He missed an easy dump pass that would have gained decent yards and a 3rd down conversion. He needs to show more in the next pre-season game.

Brandon Johnson made a great play from the sideline blocking his defender with his body for a big early win. He had a great night with 64 yards on 6 catches.

Seth Williams ran a great run, high and made a great catch for a touchdown. I liked his journey on the piece as well as his understanding of the timing needed to make the piece work.

I love seeing Kendall Hinton make plays and he made a great play to catch a TD in the 2nd quarter. He had a very solid night with 4 catches for 53 yards and a TD. He’s got a lot of competition at WR, but hopefully he can keep playing like that and keep himself on the depth chart for the Broncos.

Jalen Virgil got the Broncos out of a very bad spot with a burner from a route that allowed the Broncos 40 yards. He has rocket leg boosters and is the kind of player who can become a real weapon in the NFL. I’ll be looking for more of him next week.

Montrell Washington showed exactly why this team drafted him with a very nice return taking a wide angle to put the team in a very good position on the field. The sample size is small here, but it looks like the team has found their way back.

Week 1 of the preseason is honestly a joke as far as any serious analysis goes. We are seriously looking at depth players in the squad, which is good. Guys get hits for showing up on the field of play and that’s what preseason is all about.

Nonetheless, I’m giddy with what finally looks like a competent offense in our squad. It feels good to see a solid win from the team where they looked better coached on both sides of the ball than their opponents.