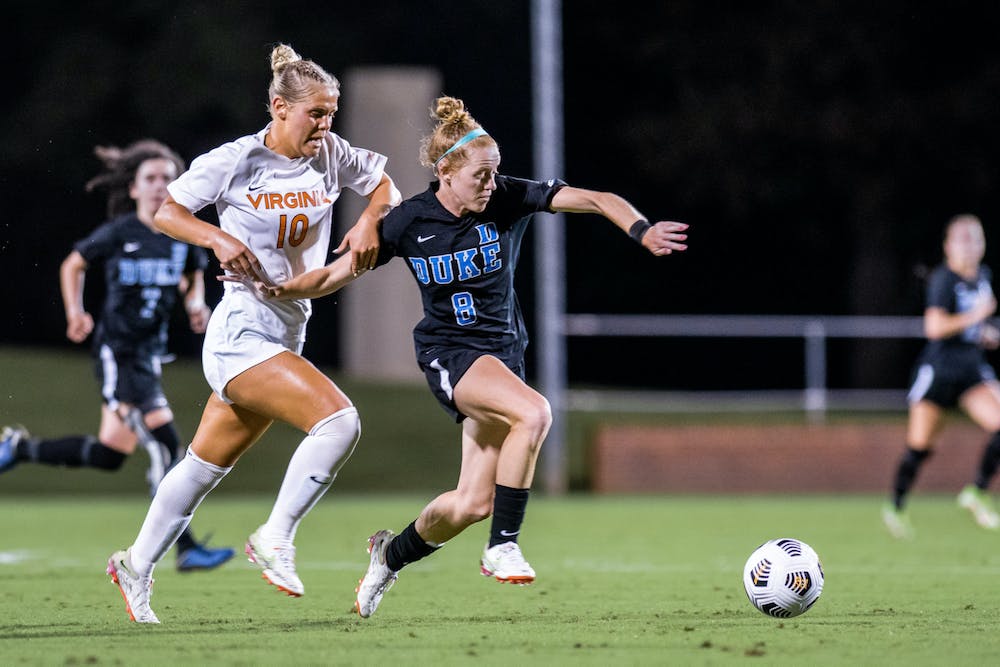 In their last home game of the regular season, the Blue Devils accomplished what eluded them last season: they beat the Seminoles, scoring their biggest win of the year and arguably the biggest of the year. history of the program.

At the start of the day, Florida State was leading a 15-game unbeaten streak, only its last game against the Tar Heels resulting in more than a win.

But the Blue Devils weren’t intimidated by their record, and unlike the game plan Duke implemented the last time the two teams faced each other, the Blue Devils were the aggressors, looking for offense early and often. They found him in the first half and pushed back the Seminole’s return attempt in the second to defeat No.1 Florida State 1-0 on Sunday at Koskinen Stadium, their first victory against the Seminoles since 2017.

After a number of looks on goal, including an opportunity in the 15th minute where a slightly faster turn from Tess Boade would likely have resulted in a score, the Blue Devils found their chance in the 26th minute. Sophomore Emily Royson sped along the straight sideline before sending the ball to the Florida state surface, as if it was on its way to star forward Michelle Cooper. But, if you thought about it, you would be just as fooled as the state of Florida.

With an astonishing amount of awareness for everyone, but especially for a freshman, Cooper let the ball roll right in front of her, where he found a wide open Boade high above the surface, which sent a rocket towards the center of the goal. Florida state goalie Mia Justus got her hands on it, but not enough to stop the ball’s momentum or Duke’s momentum.

In seconds, the Blue Devils reversed years of bad luck against the Seminoles, scoring their first goal against Florida State since 2017.

The remainder of the first half saw more possession from Florida State in Duke’s third after the substitutes entered, but little possession, with just two shots from Seminole in the final 19 minutes, nor particularly threatening. Duke’s defense, highlighted by the play of sophomore Nicky Chico, continued to ramp up, making the stops, saves and tackles necessary for the Blue Devils to reach halftime with the advantage.

Florida State came out in a strong opening press, but a first run from Duke into the Florida State area opened the field early for the Blue Devils and, after that, Duke (12-2-1, 6-2- 1 in the ACC) looked like a team on a mission, making more shots in the first 20 minutes than in the 110 they last played against the Seminoles in last year’s NCAA tournament. Florida State (14-1-1, 7-1-1) pulled off their own shots, but if you had missed the entire season so far, you’d think the Blue Devils were the best team in the nation. and the Seminoles were # 6, not the other way around.

As the second half started, Duke kept looking for that second goal to give him some breathing space – if there’s one thing teams have learned this season, it’s not to be too late. comfortable on the same ground as the Seminoles. The Blue Devils took this to heart, continuing to attack Florida State in third, and while they didn’t accumulate any goals, the impact of the continued aggression was clear on the pitch.

The Seminoles aren’t used to playing behind – they hadn’t lost regulation since 2019 – and it was obvious they were uncomfortable on the pitch. This manifested itself as a yellow card early in the second half for Florida State, followed by another 15 minutes later, as Florida State’s time of the season unbeaten slowly passed.

Duke kept up the pressure, delivering several good looks on goal, often resulting in Cooper’s seemingly out of control play. And while the shots didn’t find the back of the net, the Blue Devil defense, anchored by a strong performance from second-year center-back Katie Groff, continued to ramp up, playing their most complete game of the season. , en route to their most important win of the season, as they held a generally electric Seminole attack to just four shots on goal.

The emotions felt by the ringing signaling the end of a stressful last minute were hardly the first emotions of the day. Before the game, all five of Duke’s seniors were recognized on the pitch, along with their families. And while it might not be the last home game of the regular season for the five Duke graduates, it was a farewell to the regular season games at Koskinen Stadium.

Get overtime, all Duke athletics

Subscribe to our weekly newsletter organized by an editorial. Cancel anytime.

So it’s only fitting that the Blue Devils came away with the win, marking the first year since 2015 that they have beaten North Carolina and Florida State in the same season. And this Duke era doesn’t seem to be ending anytime soon.