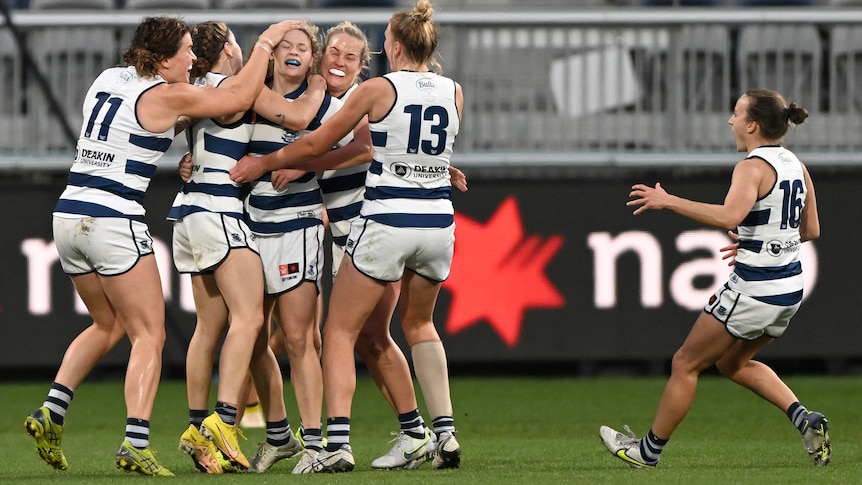 Prespakis earned a free kick with less than a minute to play and his shot from around 30m crossed to give Geelong the 2.3 (15) 1.5 (11) win on Sunday at Kardinia Park to end the first round.

The midfielder scored the first goal of her career in the third term to put the Cats on the board.

The ease with which Prespakis scored the winning goal contrasted sharply with the rest of the match, with just three goals scored despite ideal football conditions.

Despite all the ferocity of the competition, both teams put an extra player behind the ball and slaughtered a number of chances inside the 50 in a crushing game.

The Tigers found themselves four down in second term, all of which were obtainable set pieces.

Courtney Wakefield scored her only goal in the first term.

Richmond finished 11th last season, one place ahead of Geelong, and both teams will struggle to qualify for the final again this season unless they can significantly increase their forward firepower.

The Cats suffered a major blow in the first period when Rachel Kearns was forced out of the game with an A/C joint injury.

She left the game with her right arm in a sling.

Prespakis, the number two in the 2021 draft, impressed with 16 takedowns and eight tackles, while captain Meg McDonald was rock solid on defense.

Richmond defender Eilish Sheerin was outstanding on her AFLW debut, racking up 19 eliminations and five points.

Sheerin appeared to have made a life-saving tackle late in Geelong’s final goal-line tackle, only for Prespakis to receive his decisive free-kick moments later.

Tigers captain Katie Brennan failed to return in time from her off-season foot surgery and interim skipper Sarah Hosking had a team-high 22 eliminations.

Bulldogs on target for victory over Giants

The Western Bulldogs reaped the benefits of a new forward line to kick off their AFLW season with a seven-point victory over GWS.

The Bulldogs lost kickoff Bonnie Toogood to Essendon in the offseason, but returning kids Gabby Newton and Celine Moody scored two goals apiece in the 6.5 (41) to 5.4 (34) victory at Princes Park.

Lamb doubled the Dogs’ opening goal just over a minute into the clash, but the Giants fought back through 18-year-old Jessica Doyle and led by one point on the first substitution.

The Bulldogs rose to their feet early in the second quarter when former first draft pick Newton caught Georgina Fowler holding the ball and doubled up her first career goal.

Newton was making his comeback after missing all of last season due to a double shoulder reconstruction.

She kicked her second from a tight angle soon after.

Staunton sparked the Giants when she coldly pushed Isabella Grant away and scored.

But the Bulldogs had a let go just before halftime when Haneen Zreika fired her shot from close range at the player on the mark.

Staunton put the Giants within a point early in the third term, but two Moody goals gave the Bulldogs a two-goal lead going into the final substitution.

Late in the fourth quarter, Staunton pulled the ball out of the ruck and found Parker, who brought the Giants within a goal.

But a moment of brilliance from Richelle Cranston sealed the deal.

Cranston forced herself between two Giants to prevent a simple interception mark, then continued her own work, brilliantly driving a bouncing, dripping goal.

Staunton shredded his third but the Giants failed to pull off a late miracle.

Lions blitz Freo at the Gabba

Brisbane defender Lily Postlethwaite’s AFLW comeback ended in heartbreak after the 20-year-old injured her right knee in the 49-point win over Fremantle at the Gabba.

Postlethwaite, playing his first AFLW match in 553 days after recovering from knee reconstruction, fell insignificantly late in the first quarter of the win from 11.10 (76) to 4.3 (27) Sunday.

The 20-year-old was clearly in pain when she was taken to the ground by two coaches.

Postlethwaite will now undergo scans to determine the extent of the damage.

His injury put a damper on an impressive victory for Brisbane, who lived up to their patronage by dominating the Dockers.

The Lions forward line feasted on a lopsided count inside the 50m that showed 45-17 in favor of Brisbane.

Orla O’Dwyer dominated with two goals on 20 eliminations, Greta Bodey threw for 2.3, Courtney Hodder was a constant threat at ground level and finished with 2.1 for 15 touches, while Jesse Wardlaw (two goals) was dangerous in the air.

For Fremantle, Hayley Miller (15 eliminations, one goal) and Kiara Bowers (17 possessions) fought hard in a losing cause.

The Dockers have sorely missed injured duo Ebony and Kara Antonio, who are set to miss most of the season, while the departures of Gemma Houghton (Port Adelaide) and Stephanie Cain (Essendon) have also been keenly felt.

Dockers were lucky to be level at the quarter after Brisbane dominated the opener.

The Lions finally opened the game in the second term with three unanswered goals.

The game ended when two goals within a minute for O’Dwyer extended the lead to 38 points early in the third term.

Fremantle fought back with three quick majors to give themselves a sniffle, but a Bodey Goal of the Year contender quickly ended the Dockers’ comeback.