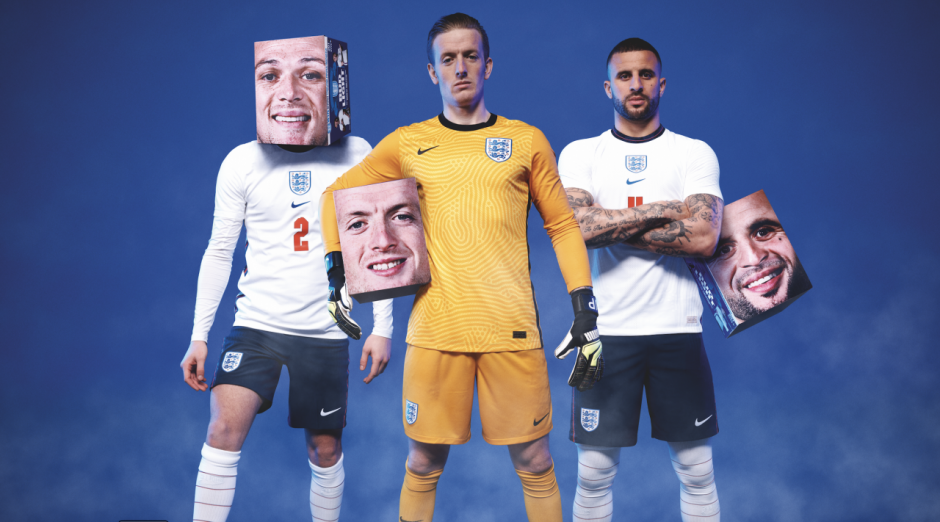 England’s taste for success at the Euro has prompted fans and brands to cheer the team on to go even further. We take a look at some of the marketing activations produced around the team as the Three Lions progressed in the competition.

The England national team’s unexpected progress to the Euro 2020 semi-finals not only thrilled Three Lions fans, it aided the marketing efforts of FA partner brands. We explore how brands are building on the already unveiled creation to capitalize on the team’s success, how unofficially aligned brands also jump into action, and what to expect as the competition advances.

SportBible: Has he ever been home?

The responsive ad plays on Kaspar Schmeichel’s controversial press conference statement “Has he ever been home?” before the draw between England and Denmark, then shows Kaspar with his head in his hands by announcing that instead, Denmark are going home.

Italian brewer Peroni Nastro Azzurro and Wavemaker created this creation before either national team qualified for the Euro 2020 final, but the bet paid off. The outdoor poster, which was released in London and Manchester the minute after England’s game against Denmark, congratulates the Three Lions and anticipates a chic clash with ‘gli Azzurri’ on Sunday.

Popular perfumer Lynx (that’s Ax, for readers in Europe and the US), celebrated England’s victory over the Danes on Wednesday with this creation produced by MullenLowe. Loren Cook and Bronwyn Sweeney were the creative directors.

BT Group’s ‘Hope United’ campaign featured prominent players from each of the three home countries competing – but with Scotland and Wales out of the race, the brand has focused on English players featured in the creation, such as Jordan Henderson and Marcus Rashford.

The campaign has maintained its message against online abuse and hatred towards the team throughout the competition, although leading politicians have questioned whether the team should drop to one knee at the start of every game.

Speaking on the campaign, Pete Jeavons, director of marketing communications at BT, told The Drum: â€œBT’s Hope United campaign is designed to help the UK tackle online abuse, a problem that doesn’t just ruin football, it ruins people’s lives. In fact, recent research has found that one in ten people have experienced online abuse in the past year.

â€œThroughout the Euros, we’ve been posting BT Tech Tips content, created by the Hope Utd team, helping give people the digital skills they need to fight hate online. We have also monitored social media and proactively responded to positive and negative stories on social media, raising awareness of the issue of hate online and helping to educate the nation on how to protect itself. “

McDonald’s: a quarter less for the quarter-finals

McDonald’s, although not an official sponsor of the tournament this year, still managed to join us by offering 25% off their entire menu on Saturday July 3 to celebrate England reaching the quarter-finals.

A McDonald’s spokesperson told The Drum: ‘We’ve been as hit with football fever as the rest of the country, from our prices dropping to $ 96 when England played Scotland in the increase in discount percentages as we progress. by the round of 16. As we hope is the case with the England squad, the best is yet to come, so watch this space for more information on the My McDonald’s app offerings as we prepare for the semi final.

â€œIt all ties into our overall strategy, which is to bring the classic ‘Should’ve gone to Specsavers’ line to life on social media, increasing the warmth and liking of the brand. It came to life throughout the tournament with responsive creativity, interruptions and opportunities for surprise and fun.

“We can’t say for sure what’s in store for England (we hope he gets home!) But win or lose, whatever comes next is going to spark a huge amount of social media conversations – and you can be sure that we’ll be looking for ways to bring Specsavers to the fore.

It’s coming home! Are you ready for the big game against Denmark on Wednesday? Treat yourself to a half-time treat. That’s 3 for Â£ 3 on loads of in-game snacks and treats! Get the beers at just 3 for Â£ 20 on select boxes. Excludes Scotland and Wales https://t.co/pK2Coh6ndupic.twitter.com/iD2yIbRINw

Golden arches aren’t the only place to find a patriotic drop in price. The Morrisons National Supermarket offered shoppers discounts on alcoholic beverages, candies and crisps, as long as they resided in England.

Consumers in Wales and Scotland were not eligible to take advantage of the discount.

Bud Light thought of the inside of the box for his creative campaign – touting his designation as the official beer of the England men’s football team. The reconciliation sees extremely close-up shots of Jordan Pickford’s phizogs, Kieran Trippier and Kyle Walker adorning the front of custom-designed drink cartons, allowing fans to toast their stars straight from the supermarket with a beer you can drink and a box you can carry.

‘Boxheads’ is a fully integrated campaign spanning television, signage, digital, social media and public relations to celebrate the brand’s role as the official beer of the England men’s football team.

EE has a long-standing partnership with the FA, having become Wembley Stadium’s first Main Partner in 2014, making it the ‘most connected’ stadium in the world.

Its’ Lions’ Den ‘content series debuted in 2018 during England’s last World Cup campaign, and this time aired daily from the team’s base camp in St George’s. Park. Hosted by Josh Denzel, â€œLions’ Den Connected by EEâ€ gives Three Lions fans the opportunity to interact directly with members of the England squad each afternoon.

England’s footballing identity is rooted in painful but loving memories of past glory. It is therefore natural that for Paddy Power’s latest campaign, centered on the current Euro 2020 tournament, the brand lent itself to this aversion by usurping England’s past failures.

Nationwide’s “#SignYourSupport” campaign aims to help customers show not only their passion for the beautiful game, but their commitment to protecting its values.

For every signature of support raised by Nationwide, it will donate Â£ 1 to the new Mutual Respect Grant fund to help support grassroots football – up to a maximum of Â£ 50,000.

The Sun and BT: newspaper raids

British and Danish tabloids The Sun and BT traded blows ahead of Wednesday’s semi-final. The Danish title released a print ad in The Sun that criticized fan favorite song It’s Coming Home and promised a return to the 9th century Viking forays. The next day, the red top released its own ad in BT with a side of Danish bacon arranged in a St. George’s cross, above the Danish caption: â€œWe’ll eat you for breakfastâ€. This latest creation was produced by Pulse Creative London.

Shooting: Pogacar after the line