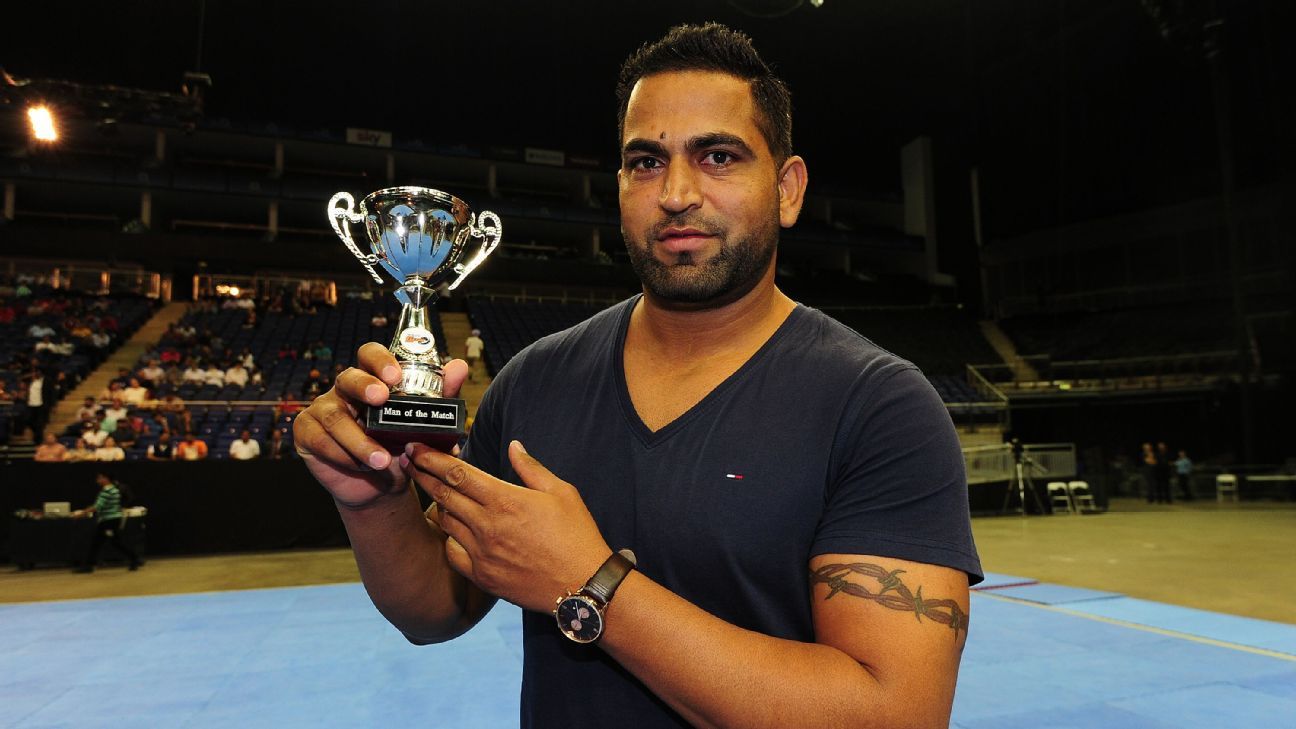 Memories of an emblematic kabaddi player

Sandeep Singh Sandhu, also known as Sandeep Nangal Ambian, an international kabaddi player was shot dead by four unidentified assailants during a tournament in Jalandhar, Punjab on Monday, according to multiple media reports. He was 40 years old.

The incident happened between 6:15 p.m. and 6:30 p.m. in the village of Mallian Khurd, according to the Indian Express. Sandeep, who had moved to England with his family, was in his hometown for a kabaddi tournament. He is survived by his wife and two sons.

Sandeep was popular on the global kabaddi circuit, competing in leagues in the UK, USA, New Zealand, Australia, in addition to the Indian national team.

Here, Debayan Sen writes about his memories of Sandeep during the first Kabaddi World League.

It’s the Kabaddi World Premier League final, outside a packed Mohali Hockey Stadium in Punjab on a chilly November evening in 2014. Favorites Khalsa Warriors got off to a quick start, as always, and put the pressure on United Singhs in a clash that pitted the league’s best against the second-placed team in the eight-team competition.

The Warriors led 6-0 and also held a slim advantage early in the third quarter. But with the scores at 52-51, with just over three minutes left for the final to recover, raider Jasmanpreet Singh ‘Raju’ is challenged with what kabaddi circle lexicon calls a kainchi (scissors), where the raider uses their legs to hinder their opponent, while using upper body strength to ensure they don’t get away from them before the 30 second timer expires. The stopper is Sandeep Singh Sandhu, better known in kabaddi circles as Sandeep Nangal Ambian, the captain of the Singhs.

The WKL marketed it in that first year as “Gladiator,” and there was no better nickname suited to a sportsman that I personally remember. Sandeep inspired a fairly unspectacular but stable team in a champion team, sort of leading from the back. In the kabaddi circle, all raiders must be marked, and while raiders must alternate, there is no constraint on which stoppers feature in a four-limbed defense. Sandeep could play corners and center, and inspired stoppers around him were great too. But what was noticeable that year was that he more often than not wanted to have a crack against the opponent himself.

While looking for photos of him for this tribute, I looked through some of this WKL. The range of positions he found himself in was spectacular. He was incredibly strong, with arms the proportions of medium-sized tree trunks. But he was also very flexible and his speed on the mat was explosive. It was an asset in the final, where the dew set in quite early and made the second half quite slippery. He kept his balance effortless, played in the spirit of the Warriors’ offensive line and inspired his team to a 58-55 win like only he could.

During these broadcasts, I had kept written notes and statistics for the whole season, which must have been somewhere in my house in Delhi. But from memory, he was both statistically and in terms of impact the best player of a long and painful season. He was possibly the only player I remember who was never substituted, playing virtually every game. In some of the photos I’ve looked at, he’s sporting a nosebleed and then a bit of a cast to stem the tide, to keep him competing, no doubt. In some instances he is engaged in a grappling hold with an opponent, while in others his jersey is ripped from his frame or suspended in the air trying to catch a raider.

Off the mat, my fellow broadcasters and cricketers Anjum Chopra and Ajay Mehra joined me in generously mingling with players from all teams. We made very good friends among the Lahore Lions players, even hanging out in their rooms when we were staying in joint hotels. Sandeep was a man of few words, however. He smiled often, and when you met him, you realized that he was actually strong without being bulky or bulky. How he then found himself in those gladiatorial stances, using arms, stomach, or legs to ensnare and suffocate raiders, was a testament to his physical form.

He was extremely popular on the world kabaddi circuit, a frequent player in leagues in the UK, USA, New Zealand, Australia, in addition to a regular for the Indian national team, who met frequently the majority of Lahore Lions players during the clashes between India and Pakistan. at the World Cup.

Above all, Sandeep provided pure delight in a sport that was meant to be as much about courage and determination, as it was about strength, fitness and endurance. As he told Anjum at the end of the presentation after the final, his message to his team, even when they were trailing, was simply that they would fight until the end and not give up. It was the essence of his game and what made the first season of this league so much fun.

As gunman targets homeless, mayors urge all to seek shelter