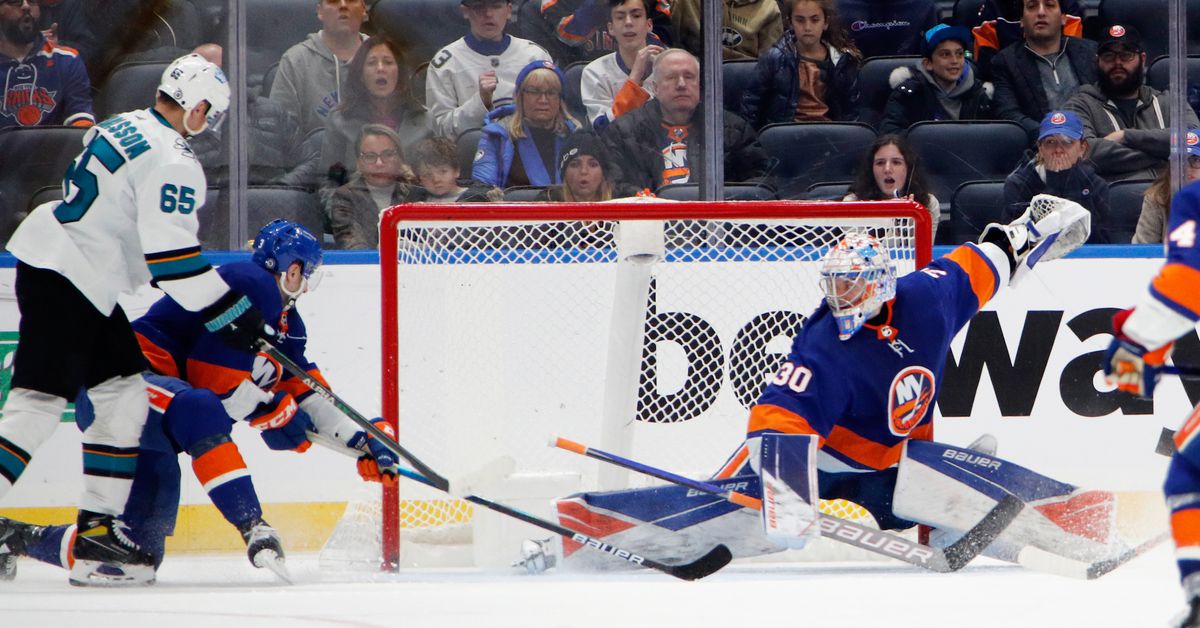 The New York Islanders returned from their COVID hiatus still without a full lineup, albeit with a few welcome faces, and still experience the same struggle to score.

There was one big change, however: for the first time in nine tries and the first time in five games at UBS Arena, the Islanders recovered a point. A real ranking point! They ultimately lost to the San Jose Sharks, 2-1 in overtime, but it’s the kind of loss that represents progress, and not just the moral kind.

Headlines will always say “losing streak” – because that point is just for losers, I hear – but the reality of Gary Bettman The people demand a winner In the NHL, ranking points count, including those you get for being tied in settlement before the brilliant bonus round begins.

This result is therefore not ideal, of course. But given that they have only managed one goal so far, the point is welcome. The eight-game losing streak in regulation is over; the winless streak is now nine.

Finally, the Islanders got the start they wanted. They came out with a jump and Mathew Barzal gave the Islanders an all too rare lead, on the first shot of the game just 64 seconds. Finally, a break for the Isles. Barzal’s celebration with Anders Lee and his cruise through the high-five line seemed to betray an expression of “See?” Remember, good things CAN happen to us too! “

Soon after, the Sharks lost Jonah Gadjovich on a strange game, his only game change. The Sharks forward came out to block a Noah Dobson shot and the shot itself didn’t seem like a problem. But maybe he skidded to stop after the block, something in his left leg gave way. He showed no pain until he tried to stand up and immediately shifted his focus to the leg, eventually requiring a stop and being helped off the ice.

Before the game ended for Gadjovich’s injury, the Sharks mounted a counterattack that required a big save from Ilya Sorokin, which would become a theme for much of the night.

But before the Islanders consistently relied on Sorokin, they seemed to continue their pace to start the game, especially with the line from Zach Parise, JG Pageau and Kyle Palmieri. Sadly, a penalty of too many men at 7:09 stopped that momentum and ultimately led to a draw.

The Sharks worked well on the puck but didn’t score on the power play; however, Nick Bonino had an excellent tic-tac-toe-count just as the two minutes expired, with Anders Lee still coming out of the box. That brought the score to 1-1 at 9:10, the last goal until more than 50 minutes later in overtime.

Lee had one of the best times to change that, making a move on Brent Burns from the corner in the last minute and shooting a quick backhand from the crossbar. Adin Hill had no idea he was coming or where he was going.

No goals in the second half, and that was largely thanks to Ilya Sorokin and some grueling penalties, which of course were also scored by Sorokin. Dobson and Anthony Beauvillier were also among the notable artists of the PK. The Sharks were excellent at guarding the puck even when the Isles had a decent chance to clear. It was frustrating to watch, but also sympathetic, if that makes sense? Clearances weren’t going their way, but blocks and big saves were.

I lost track of how many sharks looked really good on Sorokin, but a point-blank stop of Timo Meier moving through the low slot might have been the best.

Frustratingly, and much like the appeal in the first period, both penalties were avoidable. JG Pageau was sent off for interference with the goalkeeper after crashing on top of Hill at 7:02 am, and Zach Parise was sent off for game delay when his lob from the top of the defensive zone ended up just landing. over the glass in the Sharks area. Parise was in a bit of a rush after Sorokin gloved a puck but kept it in play.

Third period: hang on until boredom sets in

Dude, Grant Hutton took a few bumps. The rookie who is too old to be Calder eligible had a tough rebound as the puck jumped over his stick, leading to a partial fumble for Kevin Lebanc. But Hutton did very well to follow Lebanc, harass him but not hook or hold him, and prevent him from getting a quality shot. While doing all of this, however, Hutton crashed into the post and planks and possibly caught Lebanc skates on the inside of his thigh; Hutton left immediately for an assessment but was back on the next shift.

… and on that shift, Hutton did a block shot in a painful area.

The islands weren’t very pretty and the sharks got better pressure waves, but at least the islands covered some dangerous areas and recovered well on bounces. One of those occasions led to a decent run from Oliver Wahlstrom, who did well to cross the neutral zone and create space to get his dangerous wrist shot out through some of the legs. Hill saw it all the way, for easy glove backup.

Soon after, Barzal got a solo right wing circle look after a turnaround, but Hill came out well to cut the angle.

Shortly after Meier and Adam Pelech had a frightening collision, Sorokin made an excellent stop in traffic, and a lying Meier essentially tried to push the puck with his glove, then kick it, against Sorokin’s cushion. He’s lucky it didn’t cause a commotion.

With about seven minutes remaining in rule, things slowed down to very conservative clearances, dumps and changes by both teams. There were certainly looks that could have been unexpected goals, but nothing too dangerous.

A Bronx cheer rang out at the end of the settlement as the Isles secured their first point at Belmont and ended the eight-game scoreless streak. It didn’t sound very sarcastic though; this team has been through a ton and the survivors are clearly not yet in great shape after COVID and shutdown time.

The Isles got off to a good start in overtime, winning the first face-off and returning to their own zone to refuel. It was a decent change by Anthony Beauvillier and Pageau, but Beauvillier cheated the wrong way as Pageau was tightly controlled along the left wing boards, allowing a 2v1 in the other direction. I can’t say I totally blame Beauvillier – the team is in desperate need of goals and points in the standings – but you could see him develop as soon as he made his decision to flip a coin.

The lone man back, Adam Pelech made a great play on the first attempt, but Erik Karlsson was there for the easy finish and the match winner with Pelech and Sorokin passed the crease.

The Islanders will play in Detroit on Saturday, where Nick Leddy’s Red Wings are nowhere near as easy as before.

Kevin Durant leads the Nets ahead of the Timberwolves