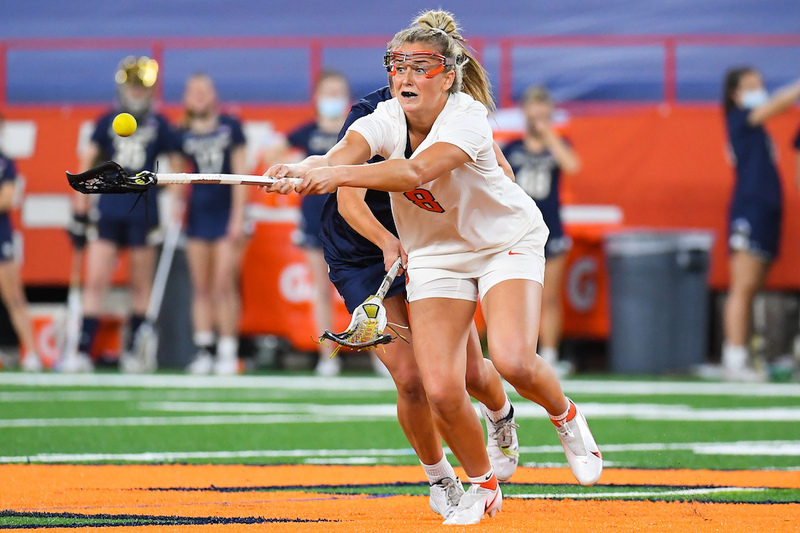 No. 4 Syracuse fouls 29 in narrow loss to No. 3 Boston College

In the second quarter, Cassidy Weeks started her shooting motion just outside the 8-yard line when Sarah Cooper began charging towards Weeks in her shooting lane. Cooper was called for a shooting space violation, conceding a free position opportunity. Weeks opted to reset, which allowed Tewaaraton Award winner Charlotte North to position herself where Weeks originally stood.

As the ball went North, she drew a shot space violation on the Orange, but she missed the shot wide. Thirty-three seconds later, she drew another free position and shooting space violation. It was the third free position conceded by Orange in 50 seconds, which allowed the Eagles to generate scoring opportunities with additional possessions.

Fouls and violations by No. 4 Syracuse (13-4, 6-2 Atlantic Coast) led to their 15-13 loss to No. 3 Boston College (14-2, 6-2 ACC) in a rematch of last year’s national championship game — which Orange lost. Friday against the Eagles, SU committed 29 fouls and gave up 13 open positions for Boston College, which converted four of eight shots from the open position.

It wasn’t just fouls inside the 8-yard that hurt Orange. Just over four minutes into the first quarter, Jenny Markey committed a foul which earned a yellow card. And in the third quarter, Markey picked up her second yellow card which disqualified her from the game, so the Orange lost a key player who had stepped up in Emma Tyrrell’s absence. Sam Swart also received a yellow card.

After the Eagles regained possession of their own defensive half, they began punting. Hunter Roman ran down the left side and Swart tripped him from behind, forcing Roman to commit a hard foul and Swart was shown a yellow card. Swart, visibly frustrated, walked to the bench to sit down for two minutes as the Eagles were given another women’s opportunity.

The Orange and Eagles went back and forth throughout the first half, but BC dominated possession time with their resets on their many free position opportunities. SU took a 1-0 lead over Meaghan Tyrrell, but after Hallie Simkins got into North’s shooting lane on an ensuing possession, North, who came into Friday’s game with the 27th-best rate of conversion from free position, scored from free position to tie the game.

To start the second quarter, BC’s Caitlynn Mossman dodged down the middle of the slot to create a better angle for a shot. Katie Goodale defended her and illegally checked her stick, which forced Mossman to the ground. Mossman’s subsequent free position dodge was saved by goalkeeper Kimber Hower, but the play represented the constant fouls against the Orange, whether for a physical foul, a shooting space violation or a three-second violation within 8 yards.

To end the first half, Belle Smith scored with 2.8 seconds left. Although the goal came in regular play, it was the result of another violation of shooting space by the Orange where this time two different defenders encroached on the shooting lane. Skeptical of the angle, Boston College got back to the top of the counter for another move in their offense, which they capitalized on as they entered with a 7-6 halftime lead.

“I know after the first half, the 19-5 fouls – 19 for Syracuse, 5 for BC – which I think is really unbalanced,” Kayla Treanor said. “It’s tough, we don’t have much control over it, but we were able to come back and make it a game.”

On the draw control, Orange were repeatedly called for a draw control violation, automatically returning the ball to the Eagles with no chance of getting the draw. In the first three quarters, BC won the tie by a combined 15-7. In a first quarter draw, the ball was loose and North started to close in on the ball on the ground, but from behind Natalie Smith grabbed her jersey and was called for a hold.

Nationally, Syracuse entered as one of the top foul teams in the nation, committing a total of 402 fouls with an average of 25 fouls per game, which ranks them 108th in the nation. Part of the high foul rate is due to the aggressive Orange defense, which often against the Eagles tried to check sticks creating loose balls, especially as BC headed into their third quarter run.

Despite improvements in the final 15 minutes, BC again extended the lead to three to put the game a bit out of reach in the final minutes, dropping the Orange to fourth in the conference. to end the regular season.

Cut and Repeat: The Woman Reworking the Canon of Photography | Photography