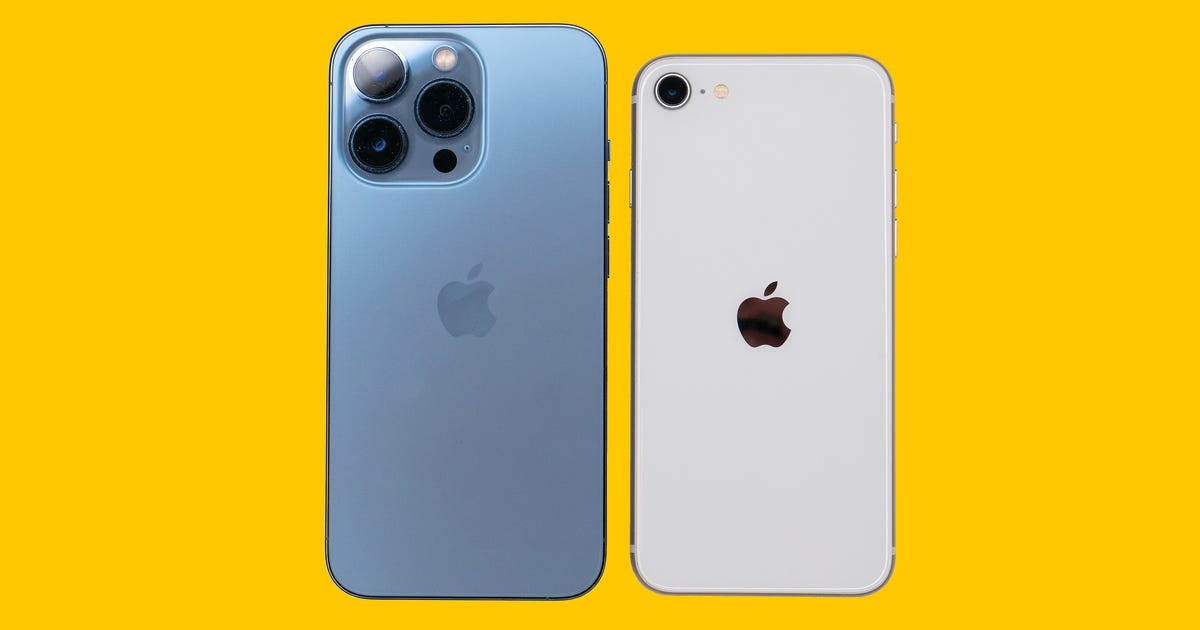 Apples iPhone 13 Pro and Pro Max have some of the best cameras ever on a phone. With its 4K video recording, ultra-wide lens and 3x telephoto lens, the two most expensive iPhones in Apple’s lineup can take great pictures. But, like many of its photographic features like deep fusion carry over to other iPhone models, including the latest $429 iPhone SE— is there a big difference in cameras between iPhone 13 Pro and iPhone SE? After all, both iPhones include Apple’s A15 Bionic chip, which powers Apple’s computational photography tools like Smart HDR.

Although the iPhone SE has only one rear camera compared to three on the iPhone 13 Pro, these phones have more in common than you might think once you get past the obvious hardware differences. I spent a week comparing these two phones for taking landscapes, selfies, portraits, low-light images, and 4K video. Obviously, given the price and design differences, you’re unlikely to choose between these phones based on their cameras alone, but it’s still a fun exercise to see how they compare.

Watch the video on this page for a full side-by-side photo comparison of the two iPhones, with more details on zoom capabilities, macro shots, and video samples.

Landscapes and HDR look great on both iPhones

In ideal lighting conditions, it’s hard for a recent phone to take a bad photo. But given the significantly newer hardware of the iPhone 13 Pro, I was surprised that the iPhone SE produced photos that are really quite close to those of the more expensive phone. Both have Smart HDR on board and each does a great job of balancing shadow and highlight detail. While the dynamic range of the iPhone SE’s sensor isn’t quite as good as the more expensive phone in more challenging lighting conditions, the difference isn’t as dramatic as the price difference would suggest.

The iPhone 13 Pro also has a larger image sensor than the iPhone SE on its main wide camera, which means you can get shallower depth of field on some shots. Take a look at the photo below, where I focused on the fence post in the foreground to give you an idea of ​​how each phone renders the background.

Both phones also have Photographic Styles, which are a preset applied to images before taking the shot. It is important to note that this is not a filter, as it identifies and applies local changes. I left the style on standard (default) for all photos to get a basic comparison, and I had trouble telling the difference between the photos of the two phones. But in some situations, especially shots of flowers or really colorful objects, I found the SE liked to add a touch of saturation to images.

Both phones also use Deep Fusion, an image processing technique designed to help improve detail and clarity in low to medium light shots. Although you have no way of knowing when Deep Fusion is activated, the cheaper SE can often produce images almost as good as the 13 Pro in terms of sharpness and detail when shooting in dazzling conditions. medium (or indoor) lighting.

The 2022 iPhone SE is much better at rendering detail in medium to low light conditions than the 2020 SE, which uses the same hardware but with a different image processing pipeline.

Where the new iPhone SE fails is in true low-light conditions, as it doesn’t have a night mode like the iPhone 13 Pro. You’ll notice that photos taken at night without much ambient light will look muddy and noisy, as the phone can’t take a longer exposure shot. Check out some real examples of night mode in the video on this page. The iPhone SE is the only iPhone currently being sold that doesn’t come with Night Mode and that feels like a big omission, especially compared to mid-range Android phones. All Pixel phones have Night Mode, including the similarly priced Pixel 5A and the recently released Samsung Galaxy A53 also has its version of Night Mode on board.

Portrait mode is a clear win for the iPhone 13 Pro

The 13 Pro lets you use the wide or 3x telephoto lens to frame your portraits, while the SE only has one perspective from its lens. I find the 3x perspective to be much more flattering to faces than the same image on the wide-angle camera. Edge detection isn’t as strong on the SE as it blurs or accidentally deletes certain details that the 13 Pro identifies correctly, like sunglasses on someone’s head.

The 13 Pro has another clear advantage over the cheaper phone. It lets you take portrait mode photos of pretty much anything from pets to flowers. Because the SE only has one lens on the back, it’s not capable of taking portraits of anything other than people. You will see this flag saying “no people detected” if you try to take a portrait mode image of a non-human subject.

Apple’s flagship phone also lets you shoot in ProRaw format for more flexibility and latitude in editing your images. The 13 Pro’s wide-angle camera also supports autofocus, meaning you can get closer to your subject and play with macro photography.

While the iPhone 13 Pro has obvious hardware benefits like a larger sensor, additional focal lengths, and Night Mode, I’m still surprised the iPhone SE can hold its own in many categories. Watch the full comparison in the video on this page.