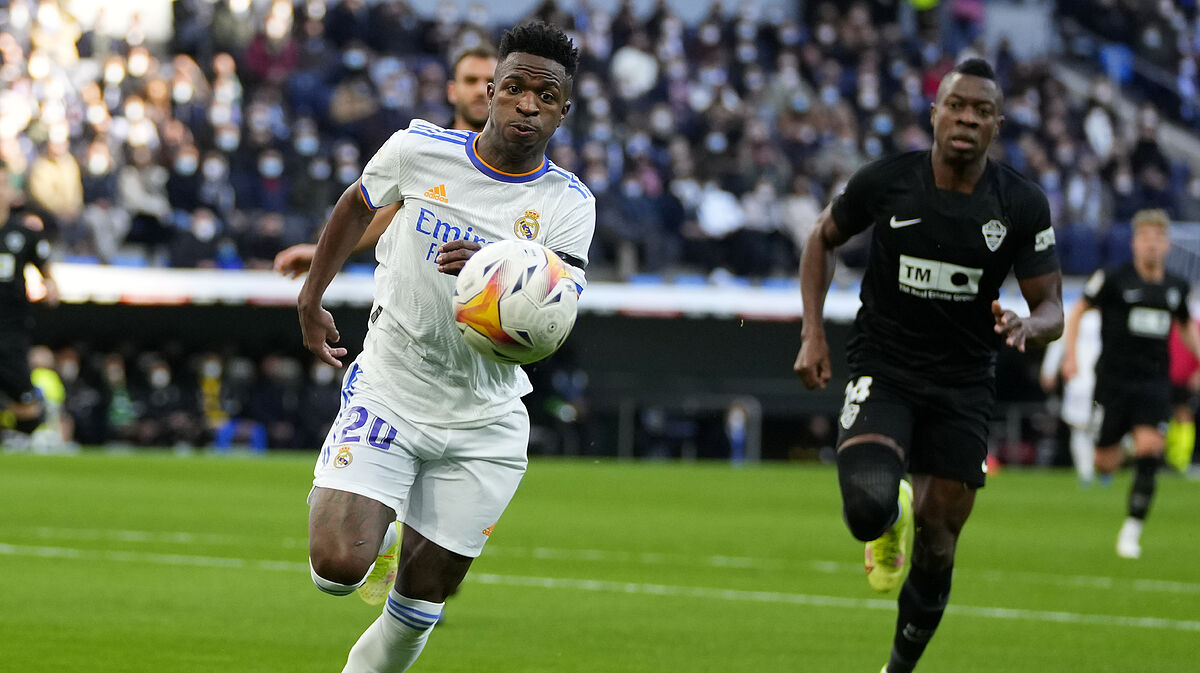 real Madrid back to action in LaLiga Santander Sunday afternoon (3:15 p.m. GMT) after 15 days of absence, after playing the Supercopa de España then the Copa del Rey, as they host Elche at the Estadio Santiago Bernabeu. The two teams met midweek in the Copa, with Los Blancos beat Los Franjiverdes 2-1 after extra time at Alicante. Stay with us for all the preparation of Real Madrid v Elche then updates to the match itself.

This is the start of our Real Madrid v Elche live blog, with updates of this LaLiga Santander match from here. As always, the entries closest to the top are the most recent.

Real Madrid managed to save a point late on but they will be disappointed nonetheless. You have to feel for Elche, who had great displays from Edgar Badia, Gonzalo Verdu, Pere Milla and Lucas Boye in particular.

Vinicius got the better of Palacios on the left and his cross was met by Militao, who rose higher to pass Badia. Real Madrid 2-2 Elche.

Luka Modric stepped in in Benzema’s absence and sent his penalty into the bottom right corner. Real Madrid 1-2 Elche.

Alaba’s header hit the arm of Pere Milla, who was not in a natural position, and after a VAR review a penalty was awarded.

Eden Hazard and Lucas Vazquez have been taken out, with Isco and Fede Valverde coming on.

Hazard’s corner from the right was met by Casemiro, whose header hit the bar and went over it.

Lucas Boye showed great skill and then picked out Pere Milla on the right side of the penalty area, with the Elche No10 then firing at Courtois. Real Madrid 0-2 Elche.

Vinicius quickly moved the ball to his right foot inside the box and sent his shot towards the far post, but it went wide wide.

Minute 65: Elche appeals for a penalty

Pere Milla made contact with Mendy and Alaba in the box, but it wasn’t enough for a penalty. Correct decision by the referee.

Carlo Ancelotti made an attacking change by bringing in Rodrygo Goes in place of Toni Kroos.

Hazard’s poor contact inside the box allowed Diego Gonzalez to make a half clearance, and Kroos sent the loose ball wide of the goal.

Benzema left holding his hamstrings and was replaced by Luka Jovic.

Eden Hazard fell under minimal contact from Diego Gonzalez in the box which led to the referee pointing to the penalty spot. After numerous complaints from Elche players, the referee went to the VAR screen and decided to overturn his decision.

SECOND HALF: Real Madrid kick off

Real Madrid have restarted the action.

Edgar Badia was tested numerous times in the first half, but it was Elche who took the lead at half-time thanks to Lucas Boye’s goal. We should have a fascinating second half on our hands.

Toni Kroos’ free-kick looked destined for the top left corner, but Badia headed there to push it away for a corner. What an excellent first half from the Elche keeper.

Eden Hazard chose Benzema in the box, the Frenchman then showing his strength to hold off two defenders before coming back to his left foot to get a shot, but he went straight into the arms of Edgar Badia.

The fourth referee has signaled that there will be four minutes of added time here at the Bernabeu, mainly due to Tete Morente’s injury.

Benzema’s kick around the corner sent Mendy away, but his shot across goal was deflected by Badia, despite the referee signaling a goal kick.

Lucas Boye gave Elche the lead at the Bernabeu. Fidel Chaves’ pinpint cross from the left was met by Boye’s header, who edged past Thibaut Courtois. Real Madrid 0-1 Elche.

Minute 37: Another blow for Elche

Pere Milla had to withdraw to receive treatment, but unlike Tete Morente earlier, he will be able to continue.

Benzema looked to put the penalty in the roof of the net, but he got too much elevation on his effort. It remains 0-0.

Vinicius Junior was knocked down in the area by Helibelton Palacios. Clear penalty.

Lucas’ pass to Hazard was faked by the Belgian which allowed Casemiro to shoot from the edge of the box but Badia got a solid leg.

Benzema knocked down Alaba’s long ball excellently, held off Diego Gonzalez’s challenge and then got a shot on goal, but Edgar Badia did well to make the save.

Benzema attempted a heel kick towards goal after a cross from Ferland Mendy, but Diego Gonzalez managed to come back just in time and touch the ball.

Tete Morente fouled Casemiro and then twisted his ankle under the Brazilian’s body. He is suffering a lot and will be replaced by Fidel Chaves.

Hazard left the ball for Kroos to get a shot from just outside the box, but the German’s opening effort went just wide of Badia’s post.

Vinicius’ twisty run inside the area saw him try to maneuver some space to get a shot, but Edgar Badia came out quickly to close the angle.

Elche presses high up the pitch and causes Real Madrid problems, but then it allows Los Blancos to counterattack with relative ease.

Eder Militao briefly fell to the ground and held his back, but he seems to be fine.

Elche kicked off here at the Bernabeu. Stick with us for updates from Real Madrid vs Elche.

Real Madrid players have paid tribute to the late Paco Gento, stepping onto the pitch with the trophies he won and his name on the back of their shirts. Afterwards, Marcelo came out with the Supercopa de Espana to show the fans inside the Bernabeu.

Elche is without head coach Francisco for this one, as was the case in their Copa del Rey draw against Los Blancos, as he still tested positive for COVID-19.

Eder Militao and Vinicius Junior are both enjoying the warm-up ahead of this afternoon’s game. They will both likely play a key role if Real Madrid are to get a positive result today.

Following his breakthrough appearance against Elche in the Copa del Rey in midweek, where he scored the winning goal in extra time, Eden Hazard was rewarded by Carlo Ancelotti with a rare start against the same team in LaLiga Santander on Sunday.

Ellie Bamber the queen of selfies! The actress was spotted taking pictures of herself on the streets of London