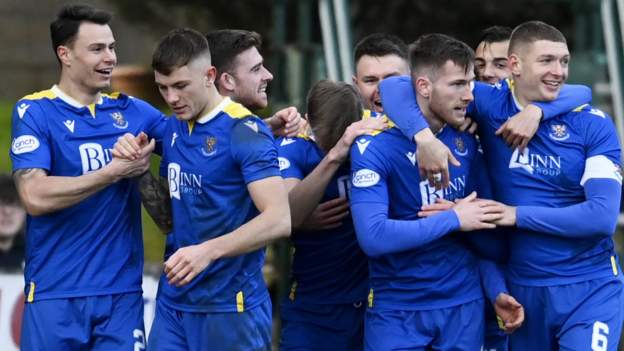 St Johnstone climbed from the heels of the Scottish Premiership after beating Hearts to claim a second home league victory of the season.

In a frantic start, Ali Crawford completed a fine team move after just 51 seconds before Nathaniel Atkinson leveled Hearts in the sixth minute.

The pace dropped but Jamie McCart took advantage of the weak defense to head for a priceless second-half winner.

Despite four games without a league win, Hearts remain third.

Tynecastle’s men have a comfortable nine-point cushion on fourth-placed Hibernian, but his side’s form will be a concern for manager Robbie Neilson.

As for St Johnstone, the revival of the Perth club continues. They have lost just one of their last six games – winning two and drawing three – and are now two points clear of Dundee, who have two games in hand.

Hearts traveled to Perth with a 12-year-old hoodoo to put to bed. It hasn’t been since 2010, when St Johnstone were managed by Derek McInnes, that the Tynecastle side won a top-flight game at McDiarmid Park.

A 14-game winless streak seemed to stretch to 15 when Crawford applied the finishing touch to a smooth movement from St Johnstone in the first minute.

But in a frantic opener, Hearts equalized when Atkinson netted a rebound after Barrie McKay’s low, curling shot bounced off the right post.

Both teams, who were missing first-choice goalkeepers Zander Clark and Craig Gordon, were relentless in their push for a second in an end-to-end start.

Everton striker on loan Ellis Simms stabbed a close-range effort from the near post before St Johnstone’s Murray Davidson netted a half-volley just wide at the other end.

The home side continued to probe and the impressive Melker Hallberg saw a long-range effort drift away from the top corner in the second half.

Hallberg was key to the decisive goal soon after when the former Hibs midfielder’s deep free kick stunned Hearts. The visiting defense’s failed offside trap saw McCart ghost at the back post and choose his place in the far corner.

The rest of the game was spent on the fierce defense of St Johnstone and inspired goalkeeper Elliot Parish.

John Souttar first had a close-range header blocked by Parish before the Scottish defender found himself in another corner late.

Souttar’s flick took a gash and fell over the bar, but Parish managed to put his body behind Peter Haring’s rebound and fiery St Johnstone saw off a monumental victory.

Man of the match – Melker Hallberg

What have we learned?

The full-time scenes in the dugout and the home stands told you all about how important victory was to St Johnstone.

Prior to Saturday, they had won just one home league game all season – against Dundee in October.

Since the winter break, Davidson’s men have collected nine Premiership points from seven games. In the 20 games before the shutdown, they had won just 14.

The Perth side can now travel to Ross County, who are one place and four points above them, next weekend in good spirits.

Is complacency setting in at Hearts? Neilson’s men have won just two of their seven league matches in 2022.

It would take an almighty collapse for the Tynecastle side to give up third place, but they must regain their clinical advantage and defend resolutely to prevent the gap to fourth from narrowing further.

The two sides will return to action next Saturday (15:00 GMT) as St Johnstone travel to Ross County and Hearts travel to St Mirren.

player of the match

In the heart of Midlothian