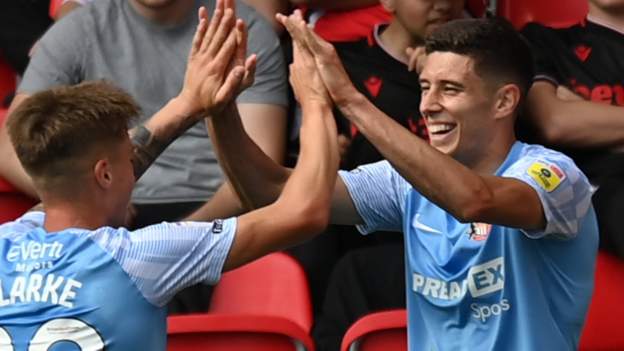 Ross Stewart’s first-half goal was enough to propel Sunderland to an away win against Stoke.

The striker fired home just before the break and the Potters, who had started the match in style, could not react.

The visitors grew into the game and looked comfortable and poised in the second half, dominating possession and creating both teams’ best chances.

Stoke had the chance to come back into the game late when substitute Dwight Gayle netted a shot from close range but sent it over the bar.

It was a deserved victory for Sunderland who showed their class in the second half after struggling to control the game from the home side and never let go.

After their first game, they gained confidence and kept the ball away from the pursuing Potters who struggled to create decent chances to level.

Striker Ellis Simms nearly made it two for the Black Cats with a few chances before Stewart rounded goalie Josef Bursik but failed to get a clean shot in the dying moments.

The victory propels Sunderland into the top five of the Championship while Stoke slips three places to 21st.

“I think we played well in the second half, we were dominant and we had a lot of chances. We just conceded a really bad goal after losing the ball high up the pitch.

“The shot shouldn’t have beaten the goalkeeper – he knows he should have saved it.

“The second half was fractured, a lot of free kicks and a lot of frustration. In the end, we couldn’t find our way back into the game.

“We are making the game very difficult for ourselves at the moment.”

“We are not going to be able to play well every week. Today in the first half the only nice thing was the goal. Apart from that we didn’t play well.

“We needed to be better with and without the ball in the second half and I think we did that.