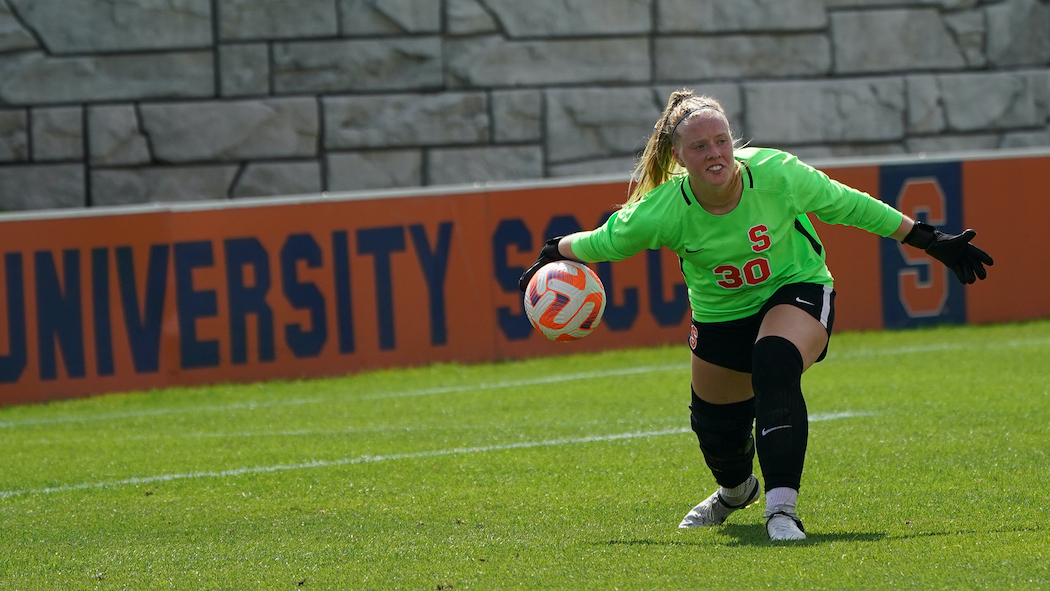 Seven minutes and 18 seconds into Sunday’s game, striker Erin Flurey was fouled after pushing her defender too hard, triggering a free kick from the right side beyond the box. Connecticut’s shot flew chest high toward starting goaltender Micaela Walsh, who prepared to pounce on it as a cohort of Syracuse and UCONN jerseys stormed the net. She managed to hit him with both fists, not far enough for him to come out of the box, but far enough for him to eventually find Chelsea Domond outside on the left side.

Domond took off, the defense settled back into their formation and play continued. It took another 10 minutes and another save from Walsh before Cara Jordan missed a shot on goal to the right and play was stopped, allowing the SU coach to run towards Walsh, who crouched . A UCONN player had collided with Walsh and knocked her to her knees, causing an abdominal contusion. She left the game 17 minutes later, substituted in favor of second-year Sierra Giorgio.

“She was in pain and she wanted to make sure she was 100 per cent for the team,” head coach Nikki Adams said. “I didn’t feel like I was 100%, so she insisted that we make the switch.”

The Huskies, who returned all of their starters, blanked SU, a team of 19 freshmen and just five upperclass starters — including Walsh. Orange (1-1) didn’t overrun UCONN (1-1) in defense and got hardly any legitimate attacking chances, but the team also went through their three goalkeepers, starting with the injury of Walsh. Then Giorgio did what she could following defensive breakdowns but conceded five goals in 20 minutes. Adams brought in rookie Shea Vanderbosch for the second half, but she allowed an extra goal late in the second period in the loss.

Three minutes after Giorgio was substituted, the Huskies’ Jessica Mazo picked up a pass up the box from Jada Konte on the left wing. Mazo quickly stopped and kicked the ball towards the goal and over the formation of Syracuse defenders. The ball grazed the crossbar and crept past Giorgio, who had strayed too far from the net into play. After a review, the referees confirmed that just enough of the ball had crossed the line, solidifying the first of three goals in five minutes.

“It wasn’t entirely Sierra’s fault,” Adams said. “We had a tough five-minute streak where UCONN scored three goals in five minutes. We have to be better in front of our net.

While Adams has said the goalkeeping competition will be a “battle” throughout the season, Giorgio has been out of place on numerous occasions. A few minutes after the first goal when Emma Zaccagnini fires a ball from the top of the box through the defense, Giorgio is not far enough on his left. Zaccagnini buried the ball in the corner of the net past a strained Giorgio. Adams said the defense didn’t play with their spin-off mentality they had in the last game and exhibitions, but Giorgio still allowed an open goal to bury the Orange 4-0.

Chimoa Okafor had brought in a 50-50 serve from midfield, well past SU’s Grace Gillard, which she passed easily before stopping about 20 feet before the top of the box. Reading that the defense had crumbled, Giorgio ran out of the net and towards Okafor, but was easily taken down by the UCONN striker, who then calmly fired a shot through the grass and into the empty net.

“The last two games, the number of blocked shots and bodies in front of the ball, we haven’t given up on that,” Adams said. “It’s a bit surprising that it happened today.”

Coming out of halftime, Adams opted to go with Vanderbosch, giving the rookie his first collegiate minutes, “the experience,” Adams said. Giorgio had finished the half by allowing a fifth goal for UCONN after Cara Elmendorf’s corner found Abbey Jones, who whipped her head to the left, redirecting the ball past Giorgio in the 41st minute. Syracuse tightened their defense, especially early on, driving attempts like Jayda Bedoya’s deep run down the right side away from danger, so Vanderbosch went unchallenged for the first half of her period.

Vanderbosch recovered two shots that UCONN took, one straight to his chest and the other to a hopper. But the freshman caught both easily with both hands, with no serious threat of another goal. It wasn’t until the 70th minute that she fell victim to the same mistake that led to Giorgio looking sideways. Later, with just under eight minutes to go in a 6-0 game, she leapt to her left on a long shot from Elmendorf heading just under the crossbar. She pushed the ball up and over the net with her left hand, ensuring a seventh goal would not be scored.

“We have three very, very good goalkeepers and (an) opportunity to see all three of them,” Adams said. “But they all bring something really special to the team.”

But minutes before, Vanderbosch was watching Maddie Carroll work the field, battling Syracuse’s Aysia Cobb. Carroll finally drilled for enough space as she approached the top left corner of the box, setting herself up for a shot. Meanwhile, Vanderbosch had crept into the one-on-one, eager to break it up if Cobb stumbled. Instead, Vanderbosch had eliminated all the space she would need to work once Carroll found herself for a shot.

Without time to put his feet down, Carroll’s shot dribbled across the floor curving just enough to the right for it to roll into the net. Vanderbosch could barely redirect his momentum to jump for the off-balance shot, and watched from the ground as Orange’s holeshot went 6-0.

“As individuals, we just need to be more specific and hold each other accountable,” Adams said. “No one is happy.”