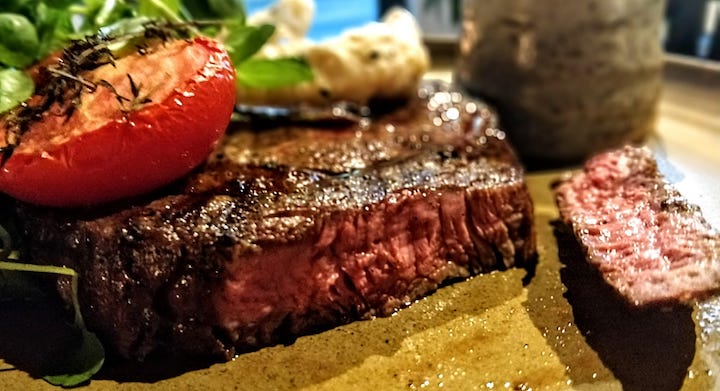 The team behind the Michelin recommended 263 near Winckley Square opened another restaurant, and my mother Yvonne and I were kindly invited for a meal there.

Located on Berry Lane in Longridge, Fell Bistro promises to offer “casual dining in a modern setting” and “memorable dishes paired with our warm Northern hospitality”.

We were warmly welcomed by the staff, quickly seated and supplied with drinks and menus. We chose Fell’s house white wine: Richemer Piquepoul, which was light, fruity, lemony and easy to drink.

The decor and lighting are modern and stylish without being pretentious, and the open kitchen runs almost the entire length of the restaurant, so Yvonne and I could see that wonderful food doesn’t need to be created on a soundtrack of: “Hell fire is hot!” Shit ! Well, we don’t have sauce! Can anyone have this fucking dog! ? »

We were given herb-flavored bread to dip in olive oil and balsamic vinegar while we decided what to order, and the first course arrived shortly after. Yvonne’s brightly colored dried trout with pastrami, creme fraiche, fennel and candied lemon was a subtle combination of flavors, each complementing the others without overpowering them.

I tried the trout before starting my cod fishcake, velouté of tartar and pickled cucumber, because although I love salted fish, it can be intense. I imagine it’s like having a kiss with Jack Sparrow after six months at sea. It seems like a good idea at first, but seconds later there’s a wave of serious, stinking cod regret.

Luckily, this fishcake was one of the less aggressive types. The salty fish taste was there, but not to the point that anyone would start to wince, and the capers in the warm tartar velouté gave a zing that matched its flavor.

My entree was beautifully presented in a large bowl, but due to my short stature, I couldn’t quite raise my T-Rex arms high enough to get the angle needed to cut the fishcake, so I had to use more of a shanking technique from above. Nevertheless, I finished it and will definitely order it again.

For her main course, Yvonne ordered a molasses pork cutlet with hispi cabbage, prune ketchup and old-fashioned mustard sauce. It was a big, tender piece of meat on the bone that Yvonne ate like a Viking in an impressive if somewhat terrifying way. The sweet flavors always go well with the pork, but the molasses also added an extra dimension of umami. The mustard sauce was mild and came in a little jar to add to your personal preference.

Although the menu wasn’t huge, everything looked tempting, including a vegan option of potato dumpling, truffle and celeriac sauce, kale and tarragon.

I rarely order a steak in a restaurant because it is often overcooked, undercooked, rubbery, crunchy or tasteless. However, as I had previously had an amazing meal at Fell’s sister restaurant 263, I decided to err on the side of caution and asked the chef what type of steak he would recommend, cooked the way he sees fit. better.

The steak I was given was a large ribeye, cooked (according to the server) medium rare.

Before someone finds me on Facebook to throw in the first “it’s not medium rare and your name is Karen”. All Karen are stupid. Ur stoopid’ – let me say I had a quick look on Google to see if there was consensus on what a medium-rare steak looks like, and there isn’t. not. Some graphs indicate that the steak would be classified as medium or rare, others that it is medium rare. I took a pic of it so everyone can decide for themselves, because kicking the hornet’s nest of this cooked steak is out of the question.

If someone orders their steak as blue as Roy Chubby Brown or charred and hotter than the inside of a pita, that’s a valid preference, not a personality flaw.

For me the steak was perfectly cooked to suit this cut of meat. It was removed from the heat at exactly the right time to ensure the fat was melted, cooked through and soft in the middle, while retaining the wonderful charred flavor on the outside. The thick line of cartilage that runs through part of a rib eye was almost non-existent and the meat was incredibly easy to cut and chew.

The steak came with lightly breaded onion rings, a grilled tomato and nice leaves which I ignored, and enough fries for the two of us, with leftovers. The pepper sauce, which is my favorite accompaniment to the steak, was also perfect. However, the flavor of the steak was so good that next time I wouldn’t order any sauce at all.

For dessert, I ordered lemon posset, blackberry compote, mint, crushed meringue, which was like breaking into a 1900s farmhouse pantry and going crazy with a tablespoon on their home canned food without any consideration for cross-contamination. The kitchen hadn’t overloaded everything with sugar, which seems to be the norm in desserts today.

They also used the same restraint in the affogato – bourbon vanilla and Biscoff ice cream, topped with hazelnuts and a dash of espresso, allowing the other ingredients to shine.

The Fell Bistro is a great addition to Longridge’s dining scene, bringing the same relaxed atmosphere in which to offer superb service, food and drink without the added order of presumption that accompanies more traditional fine dining restaurants.

It’s a place where people can dress up to visit, but those who are more comfortable in casual clothes are just as welcome. Just get clean and put your pants on.

When I write about local restaurants, people sometimes ask me for recommendations on the best place for certain foods. Everything we tried was impeccable, but next time I get asked about the best place for a steak, I’ll direct them to Fell Bistro.

Read more: See the latest news and headlines from Preston

Do you think someone ordering a well-done steak is an affront, both to you and to each of your ancestors? Launch into the comments, if you must..