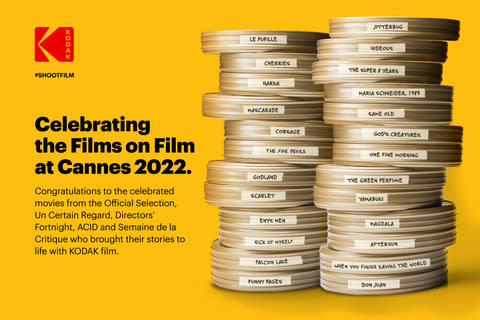 ROCHESTER, NY, May 17, 2022–(BUSINESS WIRE)–Kodak Motion Picture and Entertainment celebrates twenty-five productions shot on film at the Cannes Film Festival this year. Four filmed titles will compete in Un Certain Regard and eleven of the twenty-three titles selected for the Directors’ Fortnight will also be filmed. And as a testament to the commitment of the next generation of filmmakers to analog capture, four of the films premiering at the festival this year were directed by rookie directors.

It’s been a strong year for productions shot on film, with 2022 Oscar recognition for films shot on KODAK film titles, including Don’t Look Up, Licorice Pizza, West Side Story, The Worst Person in the World, Spencer and No Time to Die.

“On behalf of everyone at Kodak, congratulations to the motion picture artists whose outstanding work has been selected to screen and compete at the 2022 Cannes Film Festival,” said Steve Bellamy, president of Kodak Motion Picture and Entertainment. “Film capture continues to grow exponentially across the feature film, television, music and commercial segments, as evidenced by the strong release of film titles through the Cannes Film Festival this year. send a huge “thank you” to the artists who evangelize and fight for the medium. There is simply nothing more magical than the photochemical image and we are honored to help these authors realize their artistic visions on film” , Bellamy said.

The films shot on Kodak film and in competition or screened as part of the Official Selection of the Cannes Film Festival 2022 from May 17 to 28 are:

Kodak (NYSE: KODK) is a leading global manufacturer specializing in commercial printing and advanced materials and chemicals. With 31,000 patents earned over 130 years of R&D, we believe in the power of technology and science to improve what the world sees and creates. Our innovative and award-winning products, combined with our customer-focused approach, make us the partner of choice for commercial printers around the world. Kodak is committed to environmental stewardship, including industry leadership in the development of sustainable printing solutions. For more information about Kodak, visit us at kodak.comor follow us on Twitter @Kodak and LinkedIn.