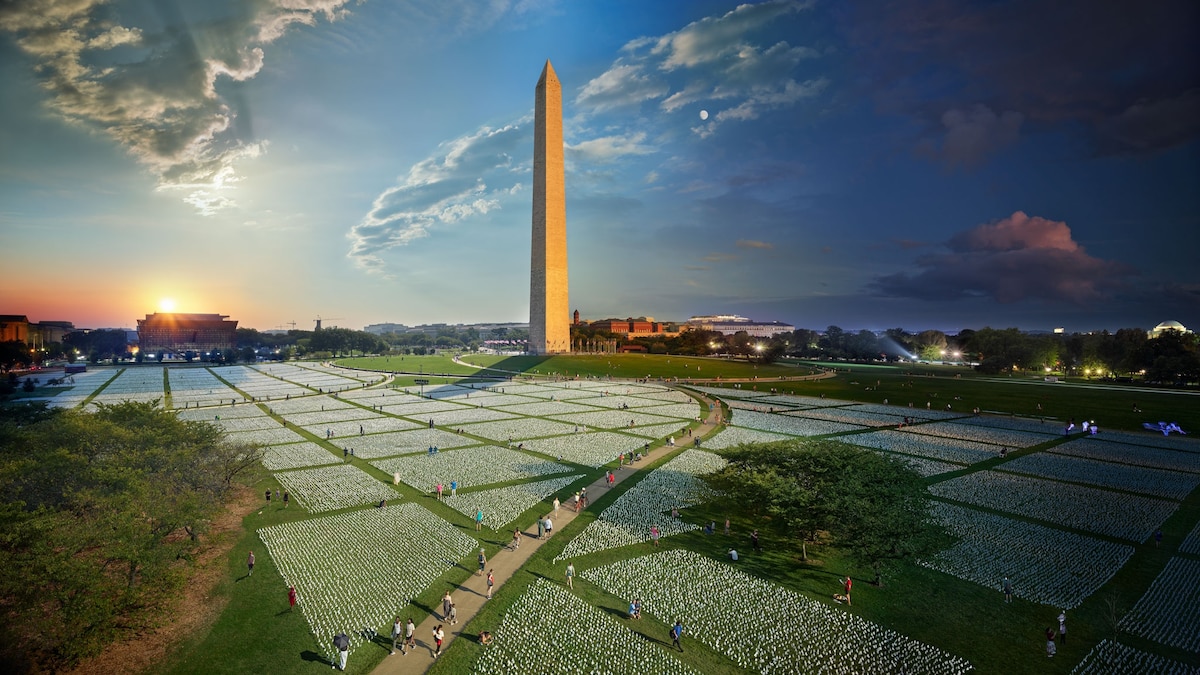 The epic COVID-19 memorial on the National Mall, in a stunning photo

For more than 30 hours, National Geographic photographer and explorer Stephen Wilkes watched people move in the sea of â€‹â€‹white flags below him on the National Mall in Washington, DC. bikes to take in the expanse of 20 acres of them. He’s seen skateboarders parading, selfie-takers framing shots – and passers-by are slowly realizing that each flag represents a life lost to COVID-19.

On September 18-19, starting before sunrise and ending after sunset, Wilkes took 4,882 photographs of the art installation In America: Remember, an exhibition that aims to convey the enormity of the country’s pandemic losses. He and his team then blended the photographs into a single composite image, part of his Day to night series.

â€œOne of the things I tried to capture was the epic scale of it,â€ says Wilkes. â€œIt is almost impossible to understand everything. “

(See how the National Mall flags pay tribute to the devastating COVID-19 losses in the United States.)

To accomplish this, Wilkes spent two days suspended 45 feet above the ground in an elevator, high enough for a bird’s eye view but low enough to discern people’s gestures and body language. He positioned the elevator on purpose: he wanted the National Museum of African American History and Culture (shown at left with the sun rising above) to be a focal point because “so many people of color have been significantly affected by this virus â€.

Thank you for respecting copyrights. Unauthorized use is prohibited.

The catwalk was another focal point, which he used to draw viewers into the picture. In a bit of serendipity he attributes to “the magic that sometimes happens when I photograph,” a large cloud has formed near the Washington Monument. “The path takes you into the picture,” Wilkes says, “and the clouds drag you around.”

Its camera angle has been fixed in place so that all photos are taken from a single point of view. When he spotted “small moments, small thumbnails”, he pressed the shutter button.

In the 13 years that Wilkes has embarked on his Day to night project, he photographed many significant events (presidential investitures, the March of Engagements 2020, the Tour de France) and emblematic places (Yosemite, Coney Island, the Western Wall in Jerusalem). This one was different, he says, “because it was an unprecedented loss of life in American history.”

Suzanne Firstenberg, the visual artist who created In America, designed the facility to help people understand the staggering numbers. Those who have lost a loved one to COVID-19 can personalize a flag with their name and message or request through the exhibit’s website to have a volunteer register a flag for them.

When visitors encounter these flags, Firstenberg wants them to think, â€œOh my God, that person was a father, mother, uncle. The grief for the family must be immense, â€she said, speaking two days before the exhibition opens on September 17. , and you’re looking at another 660,000 flags. It captures the essence of a family’s grief and yet magnifies it for the nation.

When Firstenberg was preparing the exhibit, she ordered 630,000 flags, preparing for what she believed to be the worst-case scenario. Soon she realized that she would have to order a lot more. On opening day, the death toll exceeded 670,000. Three days before the exhibition closed, on October 3, it exceeded 693,000.

It would have been easy, Wilkes said, to make a picture that lingered over the darkness of so much death. But Firstenberg created the installation to appeal to our common humanity, so â€œI wanted the image to reflect the sense of hope that we’re going to come out of it,â€ he says. â€œIt’s a moment of reflection. And maybe a time when we need to come together.

Joe Manchin could finally be on to something

Dallas says goodbye to VideoFest, one of the city’s biggest arts events