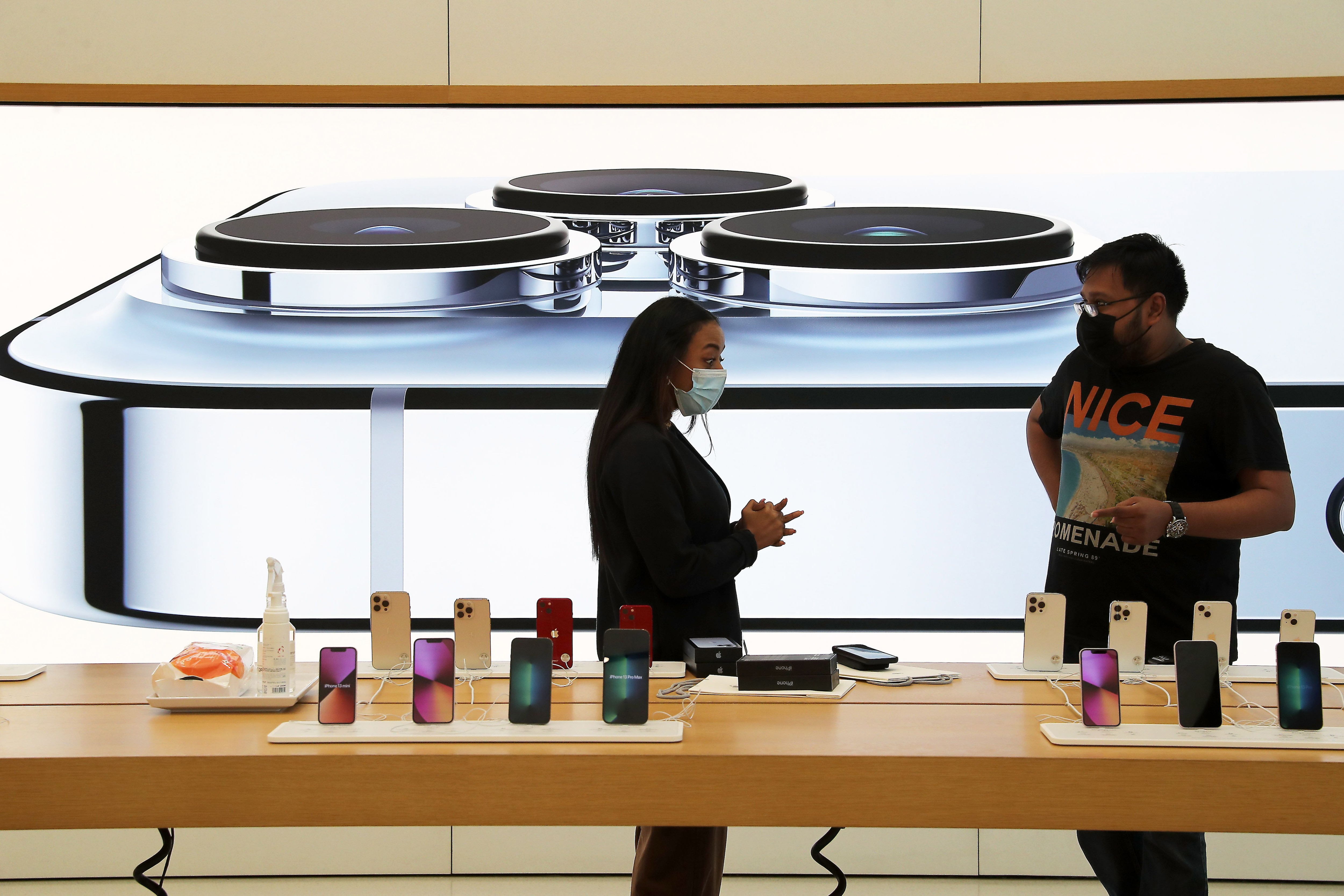 Thirteen Things You Should Know About Apple’s iPhone 13 Line

Apple’s launch of the iPhone 13 series after months of speculation will help boost sales in the upcoming holiday season, where smartphones are among the hottest gift items.

The threat of an iPhone 13 production stall due to persistent supply shortages in the chip industry is looming and could be a reason sales of the new devices continue to grow.

Here’s a look at some of the features of the iPhone 13.

Since iPhone 5, we haven’t seen this flat, curved shape. The design is similar to the iPhone 12, except for the smaller notch and larger cameras.

Since the iPhone X in 2017, the notch (a trend started by Apple and followed by others) has divided opinion, attracting favor and fire. The notch is 20% smaller on the iPhone 13, which allows for more screen space.

Meanwhile, the camera block and the lenses are slightly bigger. On the iPhone 13 and mini, the placement is now diagonal, against the right stacking of 12. On the Pro versions, they remain in the recognizable triangle format.

You can now shoot videos on the iPhone 13 with bokeh or blur effects, and it can identify when a new subject enters the frame, which it will automatically shift focus to. Most importantly, you can change the subjects and blur effects after recording the video, making it the only smartphone to have this capability.

As the iPhone 13 records videos in RAW format, it means that they are saved in layers, which allows you to change the focus even on other devices.

Like their predecessor, the iPhone 13 and 13 mini have dual 12MP cameras and reveal more detail in the dark and capture 47% more light. Meanwhile, the Pro collects 92% more light and, for good measure, each of the three lenses now has a night mode.

As a bonus, night mode is now also in portrait mode.

Buyers flocked to the Apple Store in the Mall of the Emirates to purchase the new iPhone 13. All photos by Pawan Singh / The National

Specific to Pro models, the telephoto lens of the iPhone 13 now has a 3x optical zoom and a 6x optical zoom range, compared to 2x and 5x respectively. This will be a big advantage, especially when shooting in portrait mode and for subjects further away.

With 25% more vivid colors and peak brightness of up to 1,200 nits, Apple promises content will be more vivid than ever.

Up close and personal

Believe it or not, iPhones did not have a macro mode – close-ups – until the iPhone 13. When the device detects something within the 2 centimeter detection area needed to activate macro mode , it immediately switches to the wide-angle lens. and you are ready for those very close up shots, resulting in images with excellent detail.

Here’s the problem: Since it’s there by default and just waiting to be triggered, using it in video mode (yes, it’s also available for video) means your recording will also capture the transition to the large lens. angle, which may ruin your video. Apple has announced that it will roll out a software update in the fall that will automatically turn off this automatic switch to macro mode.

As I mentioned in my video, iPhones’ macro mode is great, but you can’t turn it off manually.

Apple told me “A new setting will be added in a software update this fall to disable automatic camera switching when shooting at close range for macro photography and video” pic.twitter.com/n94WA5gdaj

Normally, iPhone iterations provide increased durability. The iPhone 13, however, retains the features of the iPhone 12, including an IP68 rating (maximum depth of six meters up to 30 minutes) and a Ceramic Shield front, developed with Corning.

Apple says it’s still the most durable material combination on an iPhone, but note that it’s not swim-proof like the Watch Series 7. And please, keep it out of salt water.

Any futuristic-sounding gadget should have the goods to back it up. Apple’s A15 Bionic chip has 15 billion transistors, can process 15.8 trillion operations per second, and features a processor and GPU that are 50% and 30% faster than the competition, respectively. It also has a faster neural engine and a new video encoder and decoder.

To put it simply: it’s fast.

It won’t be so obvious, but longtime iPhone users will immediately notice the smoother feel when they slide up to unlock the device and apps slide out of place. This is a major advantage for those who rely on the smartphone to perform tasks, especially for work.

In recent years, the batteries on new iterations of iPhones have basically stayed the same, but this time around we’re getting a significant boost.

Of course, we put it to the test. With minimal usage – and by that we mean using it only for answering messages, taking calls and playing games sparingly, taking photos and checking emails – the iPhone 13 Pro Max has shut down. late at night on the second day. Decrease its use further and it has a good chance of spilling over on a third day. As for the rest of the iPhone 13 units, they had no problem hitting for over a day and a half, with plenty to spare despite heavy use.

As usual, Apple doesn’t really care whether it’s late to come up with something that’s already been on the market for a long time. Include internal storage in this category, as the company ultimately decided to release an iPhone with 1TB of storage. Some would argue that 512GB is already huge – Apple has a very good file compression system – but given the explosion in content and the growing appetite to save more on your device, 1TB seems like a viable option for us. days.

Of course, Samsung has done this trick before with the 2018 Galaxy S10 +; add its 512GB capacity for a microSD card and that’s a whopping 1.5TB of storage. But Samsung was not the first to launch a 1TB phone – this title belongs to China’s misunderstood Smartisan with their Nut R1. Smartisan, however, did not last long, selling some assets to TikTok’s parent company, ByteDance, which said the move was made with the intention of make your own smartphones. Unfortunately, that “dream of beating apple“died after ByteDance suspended its device business.

With the popularity of conferencing and collaboration apps like Microsoft Teams and Zoom, Apple has decided to join in the fun by giving FaceTime a major upgrade. There’s now a grid view for chats with multiple people, and spatial audio makes it look like you’re all in the same room. And those you invite can join even if they’re using an Android or Windows device, and even through Microsoft Edge or Google Chrome.

You should upgrade to iOS 15 to take advantage of this feature.

Another feature of iOS 15, Apple Safari’s web browser now has the tab below the screen, making it much easier to access and enter URLs. Swiping left or right on the address bar will allow you to switch between tabs, while swiping up reveals all open tabs. If you want to go back to the classic single tab format, head to the Safari wing in settings and select it.

IPhone Through the Ages: Former Apple CEO Steve Jobs introduced the iPhone to the world in San Francisco, California on January 9, 2007. It featured a 3.5-inch screen and a 2 megapixel camera. Reuters

While this feature isn’t new, it is going under the radar. All iPhones, back to iPhone 4s and iOS 6, work with compatible hearing aids. The feature allows hearing impaired people to stream and enjoy audio and content, as well as use it in an emergency.

This question is more specific to the iPhone 13 Pro Max: its price is exorbitant of 6,819 Dh ($ 1,856). It’s safe to say that all the new features – longer battery life, cinematic mode, 1TB storage – could well justify the price.

At this rate, the only other device that can be said to rival this price point is the Samsung Galaxy Z Fold3, although it has a unique proposition.

The Booster-Shot debate was a public health debacle