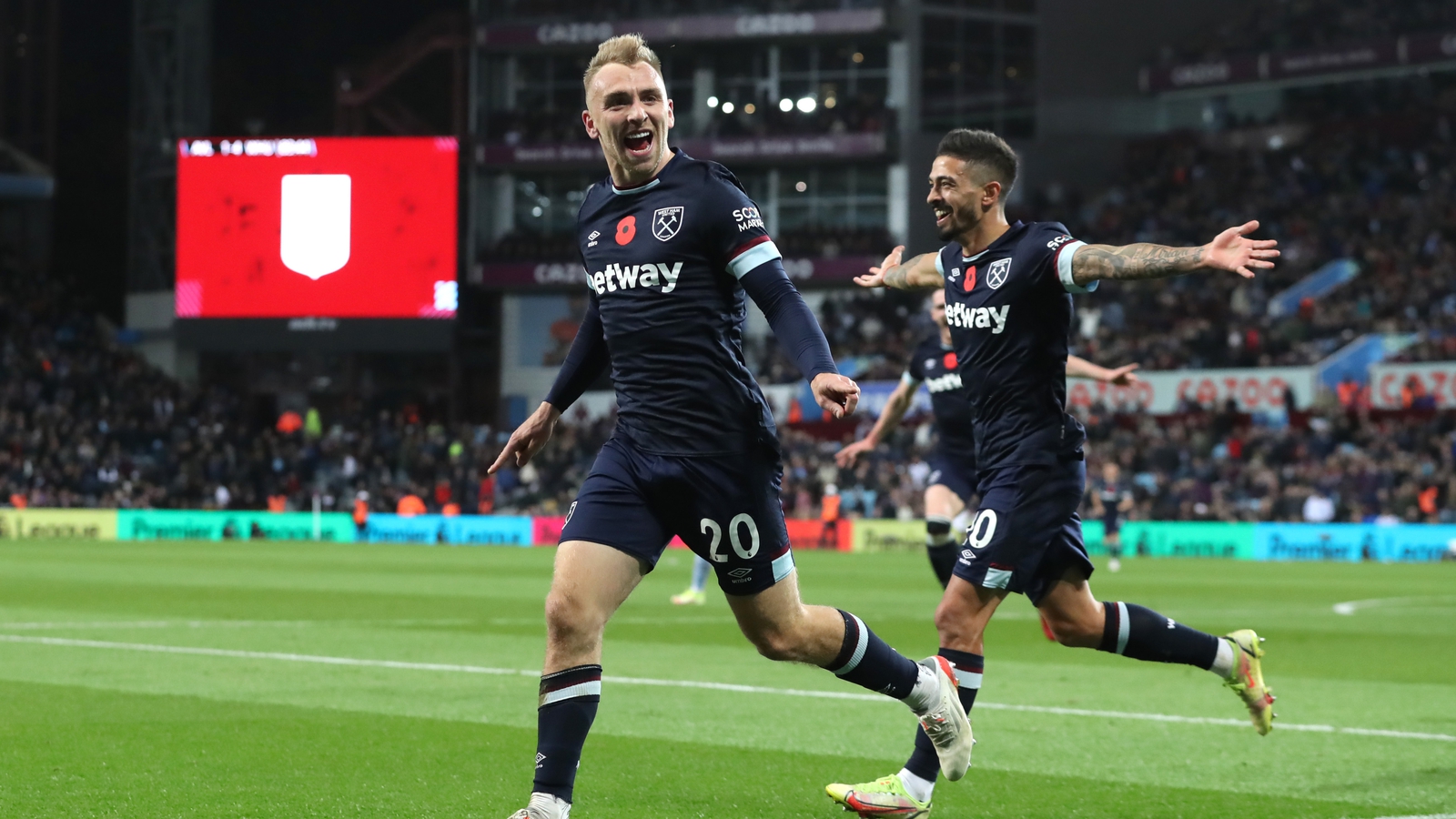 West Ham won 4-1 at Aston Villa to move closer to Manchester City, third in the Premier League table, and end a wonderful week for David Moyes’ side.

The Hammers beat London rivals Tottenham last weekend and reached the Carabao Cup quarter-finals with a penalty shootout win over defending champions Manchester City before putting Villa to 10 over the sword.

Villa boss Dean Smith will feel that everything that could go wrong has gone wrong as his side slipped to a fourth consecutive Premier League defeat.

Ezri Konsa’s red card shortly after the break gave Villa a tough job and new goals from Pablo Fornals and Jarrod Bowen in the final 10 minutes settled the game.

Leon Bailey got his first Premier League start as Smith made four changes, with Jacob Ramsey, Kortney Hause and Marvelous Nakamba as well.

On the verge of making his 100th Premier League appearance, Tyrone Mings was Villa’s most high-profile form change victim after three successive defeats, reverting to a 4-3-3 with Konsa partner Hause at the heart of the game. defense.

West Ham boss Moyes has named the same team that started the win against Tottenham, meaning there were eight changes from the squad that beat City in the Cup on Wednesday night.

The change in form saw Villa get off to a nervous start and Said Benrahma had already seen the goal before West Ham took the lead with just seven minutes on the clock.

Rice sent a pass down the right flank for Johnson, who was in all kinds of spaces and cut inside on his left foot before completing a low shot in the far corner of the net.

Villa suffered another setback when Ramsey was injured just a quarter of an hour later, although the resulting free kick gave the hosts a first chance as Bailey watched a cross on his foot at the far post before flying into the belly of Lukasz Fabianski.

A superb defense from Matty Cash denied West Ham a second goal as he twice blocked Bowen’s efforts, bravely heading for the second attempt just outside his goal line, before Watkins leveled things off at the 34th minute.

John McGinn and Emiliano Buendia combined down right, Buendia turning Fornals to get to the signing inside the penalty area where his low cross was directed home by Watkins from the penalty spot.

Villa’s fun was short-lived, however, as Rice restored the visitors’ lead with a 25-yard shot that slipped into the back of the net via a touch on the post four minutes later. .

Things got worse for Villa at the start of the second half with Konsa’s red card. A defensive mess for Dean Smith’s side, Hause caught Fornals in the runaway face before Konsa was then booked for throwing Bowen to the ground just on the edge of the box.

VAR looked at both incidents and decided that Hause had no case to answer, while Konsa saw his yellow card turn red after referee Chris Kavanagh looked at the monitor.

Mings was featured for his landmark appearance, with Buendia sacrificed.

Against all odds, Villa was again almost level just before the hour when Watkins’ shot brushed against Fabianski’s fingertips and crashed into the crossbar.

It was Villa’s great chance to get something out of the game and Martinez made some nice saves on either side of the second half midpoint, repelling a free kick from Rice and a shot from Bowen in the corner. .

Villa was still in the game at the start of the final 10 minutes, but the Hammers gave themselves some breathing space when Fornals tapped the rebound at close range after Martinez did well to save Bowen’s initial shot.

Bowen added a fourth goal after 84 minutes with another single goal after being generously put in place by substitute Manuel Lanzini.

Initiatives to help micro-enterprises and SMEs to recover welcomed