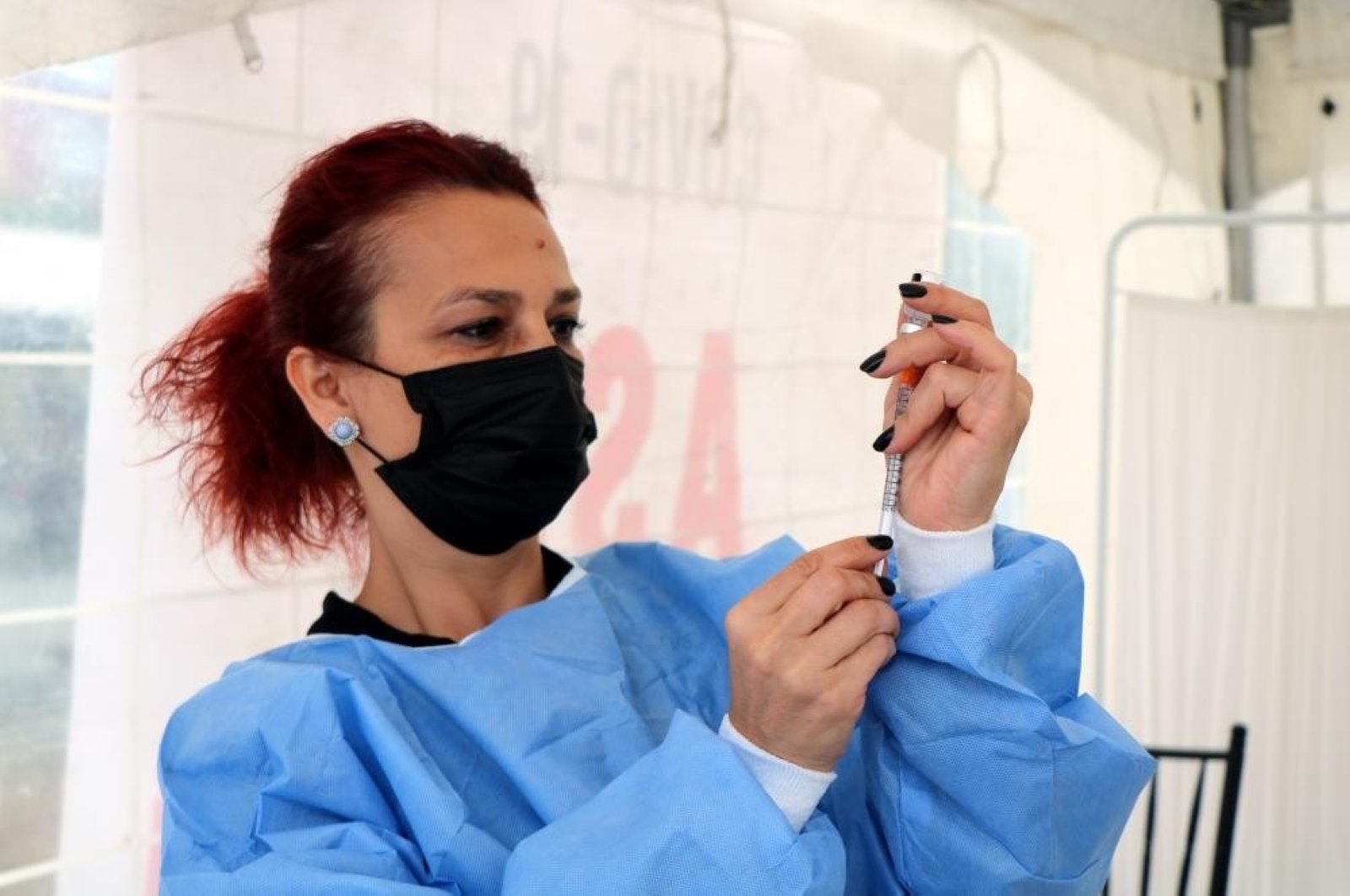 Despite the increase in daily cases due to the highly contagious delta and mu variants, Turkey appears determined to eliminate the COVID-19 disease. The country has administered nearly 105 million vaccines against the coronavirus since the launch of a vaccination campaign in January, official figures showed on Sunday.

Some 52.6 million people have received their first doses of a COVID-19 vaccine, while more than 41.9 million are fully vaccinated, the health ministry said.

Data showed that 84.74% of the country’s adult population received at least one dose of a two-shot vaccine.

Separately, the ministry reported 26,161 new cases of coronavirus, while another 221 people have lost their battle with the disease in the past 24 hours.

No less than 335,244 tests for the virus were carried out during the last day.

“The number of cases should be compared to the average of a week ago, not the day before,” Health Minister Fahrettin Koca said on Twitter.

He urged everyone to follow measures to curb the spread of the virus and to get vaccinated.

Turkey started administering CoronaVac vaccines to healthcare workers in January and the president himself was vaccinated with the inactive vaccine. Later, authorities also began administering the Pfizer-BioNTech vaccine to citizens who chose it.

The country once ranked sixth in the world in terms of immunization, but momentum has slowed somewhat, now ranking eighth in the world.

As Turkey seeks to increase COVID-19 numbers vaccination program, the minister urged the public to receive their third dose of the vaccine.

COVID-19 booster injections increase protection against the disease, Koca said. In a written statement released after a virtual meeting of the Coronavirus Scientific Advisory Board that advises the government on pandemic measures, Koca said people who received three injections accounted for less than 2% of all cases of COVID-19 in the country. Almost 90% of active cases in hospitals are people who have not been vaccinated or who have only received one vaccine, he explained. It is also expected that those who have received two doses of the mRNA vaccine will need a booster five to six months after receiving the second dose, he said.

“About 6 million of our citizens are eligible to receive their booster shots,” Koca said, calling on the public to “not waste time” getting vaccinated.

A nationally produced COVID-19 vaccine – Turkovac – was developed by scientists at Erciyes University in Turkey and began its phase 3 human trials in June. The inactive vaccine is now in the emergency use approval phase, and Health Minister Koca has announced that its mass production will likely begin in October once it gets approval.

Officials said they were already in talks with other countries to conduct Phase 3 trials of Turkovac. Oktay confirmed that negotiations are continuing with Pakistan, Azerbaijan, Argentina, Colombia and Poland, among others, to bring lawsuits in those countries. “We are working hard to make our locally manufactured vaccine available not only to our nation but to all of humanity,” Oktay told the Anadolu Agency (AA). He noted that the international trials would help Turkovac become internationally recognized.

â€œThe experience we have gained with the Turkovac process will also help us introduce new locally made vaccines to the international community,â€ Oktay said.

Two key steps in tackling the coronavirus – getting fully vaccinated and complying with individual safety measures – will prevent the emergence of new variants, a Turkish infectious disease specialist also warned.

Speaking to AA, Dr Ismail BalÄ±k, head of the Department of Infectious Diseases at Ankara University, said the mu variant of the coronavirus recently reported in Turkey and other variants that may emerge are important, but it is not There is no need to worry as they are closely watched across the world. Koca announced on Monday that two cases of the mu variant have been discovered in Turkey, adding that the ministry has no plans to implement further measures at this time. First discovered in Colombia in January 2021, the mu variant continues to spread in the South American country, where it accounts for 39% of infections, while in Ecuador it accounts for 13% of cases. Although its global prevalence is less than 0.1%, the variant has been detected in 39 countries to date.

The mu variant is the fifth “variant to watch closely” for the World Health Organization, stressed BalÄ±k, adding that the virus mutates when it finds a means of transmission. It is currently believed that the transmission rate of the mu variant is at least equal to that of the delta variant, he said. He stressed that in order to prevent the emergence of new variants and waves of COVID-19, people must be fully vaccinated, wear masks, respect social distancing and follow hygiene measures. “The increase in the number of cases is triggering the emergence of new variants. Vaccination is the most powerful weapon to prevent this,” he said. Noting that the daily number of new COVID-19 cases in Turkey has fluctuated around 20,000 “for a long time,” BalÄ±k said there were more than 500,000 active cases across the country.

He pointed out that with the start of in-person education in Turkey and increased mobility, such as people returning from vacations to metropolitan cities, there is a risk of an increase in new infections if action is not taken. “We have two weapons at our disposal to prevent a further increase in the number of cases: vaccines and precautions,” he said. “If 80 to 85% of all citizens over 12 receive the full dose of vaccines, the emergence of new variants and the growth of the pandemic will be avoided,” said the doctor.

Turkey has taken a new step in the fight against the COVID-19 pandemic. Soon, regular polymerase chain reaction (PCR) testing will be required for the unvaccinated public for travel and entry to certain sites. In light of these developments, a digital vaccine pass applied in the United States and some European countries has broad support in Turkey, according to a new survey.

The survey, conducted by the Turkish Confederation of Employers’ Associations (TISK), interviewed service sector workers and those who worked from home during the pandemic about their views on vaccination and measures against COVID-19 . Three in four people interviewed for the survey, which covered some 2,000 people, favored a vaccination pass in the country. Currently, the Department of Health offers unique codes for each individual that document their status as infected or uninfected with COVID-19. A digital application from the ministry also confirms the vaccination status of users.

A vaccine pass checks people for their immunization status and if they have a negative PCR test result. Eight in ten respondents agree with the idea of â€‹â€‹banning people from accessing public spaces if they cannot prove that they are vaccinated or not infected. The same majority of those interviewed also called for legal sanctions against people who refuse to be vaccinated. They also support restrictions imposed by employers on those who refuse to be vaccinated even though they are properly informed about the benefits of vaccination. On reluctance to vaccination or outright rejection, the survey looked at this state of mind. The unvaccinated respondents justified their opposition primarily by concerns about the safety and side effects of vaccines, while others said they were influenced by the opinions of those around them against vaccination.

Anti-vaccines are a problem

As in many parts of the world, anti-vaccines continue their fear-mongering efforts in Turkey as well, leading to more infections and deaths.

Istanbul governorate recently gave the green light to a rally that brought together die-hard anti-vaccines in the city’s Maltepe Square. The rally, designed by a small political party, drew nearly 3,000 people according to organizers, while scientists criticized the event. The Anatolian Union Party (ABP) was initially banned by the Maltepe district governorate, but the Istanbul governorate later approved the rally.

Although reluctance to the vaccine is believed to be higher in Turkey than outright opposition to the vaccine, anti-vaxxers have found support on social media since the coronavirus pandemic entered the world. Turkey in 2020. They do not categorize themselves as anti-vaxxers and claim not to oppose it. vaccines but rather “the imposition of a commercial liquid” on the masses, as ABP president Bedri YalÃ§Ä±n said on Thursday on Radyo Sputnik (RS FM).

The â€œGrand Rassemblement du RÃ©veilâ€ brought together eminent opponents of the vaccine, including columnist Abdurrahman Dilipak and several anti-vaccine doctors. The rally was the first of its kind in terms of size, although an anti-vaccine doctor managed to rally a few dozen people in Istanbul’s IskÃ¼dar district in June.

The event drew wide condemnation from doctors and scientists who had repeatedly called on the public to be vaccinated for months. Professor Necmettin Ãœnal, an academic in the Faculty of Medicine at Ankara University, believes that the actions of anti-vaccines should be considered “a crime against society”.

â€œThese people should be sentenced to severe penalties. All non-governmental organizations (NGOs) should oppose it. Anti-vaccines commit the crime of manslaughter with false information they disseminate. In addition, a gathering of a large number of unvaccinated people in one place can only make the pandemic worse, â€he told the HÃ¼rriyet newspaper.

Ãœnal said that while it respects the views of people reluctant to get vaccinated, the anti-vaccination movement is “something else”.

â€œYou can’t take someone seriously if they say vaccination is ‘a plot to wipe out the Turkish race.’ Anti-vaccines also have their own agenda to take advantage of this movement. I know some anti-vaccines, using their public image as doctors, are marketing their own ‘products’ against the coronavirus at astronomical costs, â€he said.

Professor Mustafa Ã‡etiner, an in-house disease expert, said the rally would be “a grenade counting until the explosion”.

â€œThese people are not vaccinated and refuse tests, masks and social distancing. This is a risk to public health. I cannot say that it is their democratic right, â€he told HÃ¼rriyet. Ã‡etiner added that doctors who attended the rally should be sanctioned by the health ministry.

Since December 2019, the pandemic has killed more than 4.68 million people in at least 192 countries and regions, with nearly 227.8 million cases reported worldwide, according to Johns Hopkins University.